Jason Calvin Garrett, a.k.a. Jason Garrett is a retired NFL player who currently stands as the head coach of the Dallas Cowboys of NFL. Previously, he served as the offensive coordinator and assistant head coach of the Cowboys prior to being promoted to interim head coach after the firing of Wade Phillips on November 8, 2010.

Owns A Lavish Manion Dallas, Texas, How Much Is His Net Worth?

In 2015, Jason Garrett inked a five-year $30 million contract with Cowboys. With an annual salary of $6 million from the Dallas Cowboys, Jason Garrett is ranked #10 in the 10 Highest-Paid Coaches in the NFL. Coach such as Bill Belichick, Jon Gruden, and Pete Carroll hit the 1st, 2nd, and 3rd positions, respectively.

Furthermore, he has collected a jaw-dropping amount of $25 million through his fifteen years of playing career. Looking at his contract and career earnings, his net worth is estimated at over $20 million.

Jason Garrett is married to Brill Garrett. The couple met as a freshman and had a geology course together three times a week as both of them attended the same college, Princeton, and graduated together in 1988. Started with friendship, they ended up dating eachother.

After being in a relationship for several years, the couple decided to take their relationship to the whole new level. Jason and Brill tied the knot in 1994, in an intimate ceremony.

In 2017, on an award function in 2017, Jason said that his wife, Brill is his best friend and his pillar and his biggest supporter for more than half of his life.

As of 2019, they would be celebrating their 25 years of marriage. However, they have no kid yet.

Jason Garrett's spouse, Brill, was born as Brill C. Aldridge on December 8, 1965. Her star sign is Sagittarius. Further, she holds an American nationality who came from a white ethnic background.

A proud graduate of Princeton, she has a law degree from the prestigious Harvard University.

Jason Garrett was born to Jane Garrett and Jim Garrett, who was an American football player, coach, and scout.  He has three brothers: Jim Garrett III, a teacher, and former football coach, John, and Judd, both played in the World League of American Football. Currently, John is the head coach of the Lafayette College football team, and Judd works in the Dallas Cowboys front office. 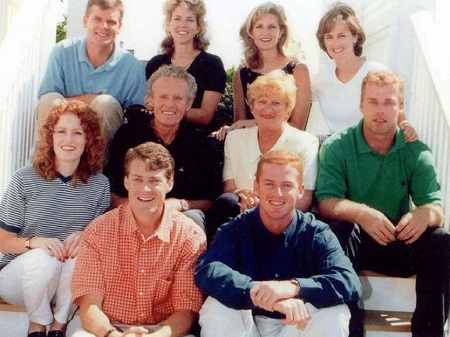