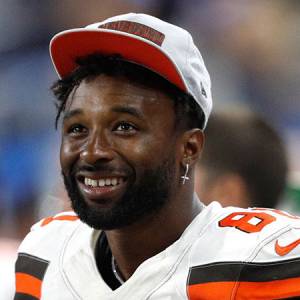 Jarvis Landry is an American professional NFL Player who plays in the National Football League (NFL). As of 2019, Jarvis Landry currently plays for the Cleveland Browns as their wide receiver. Previously, Jarvis Landry played for Miami Dolphins.

As a wide receiver, Jarvis Landry reportedly earns around $15,100,000 as his yearly salary from Cleveland Browns. Further, Jarvis Landry has an estimated net worth of over $15 million. As per his marital status, he is in not married but currently in a relationship with his girlfriend Estrella Cerqueira.

Jarvis Landry Net Worth and Salary

Further, the NFL Player Jarvis Landry earns a good amount of money from various sponsorships, collecting a decent amount which helped him to collect satisfactory net worth.

Landry has endorsement deals with shoe brand Nike. Nike reportedly pays a huge amount for the shoe promotion and Landry can be seen promoting the brand through his Instagram post.

Inspired by @kingjames I’m auctioning off my “GAME WORN CLEATS” from this Sunday’s Game.... All proceeds will go to @ipromiseschool #WEAREFAMILY #DawgPound

Jarvis is living a luxurious life with the earnings that he made through his career. He has fleets of cars in his collection and can be often seen flashing them among the people. Some of the best he owns are Range Rover, Maserati, Rolls Royce, etc.

Celebrating Hard Knocks finale on tonight with 50% of your joining fee with promo code “Hard Knocks”. Get it while it lasts, download the app and get signed up today! @driveoptions

As per his marital status, he is not married. Hence, he does not have a wife. Reportedly, he is in a romantic relationship with his girlfriend Estrella Cerqueira. Additionally, the couple is blessed with a daughter, born in December 2017. 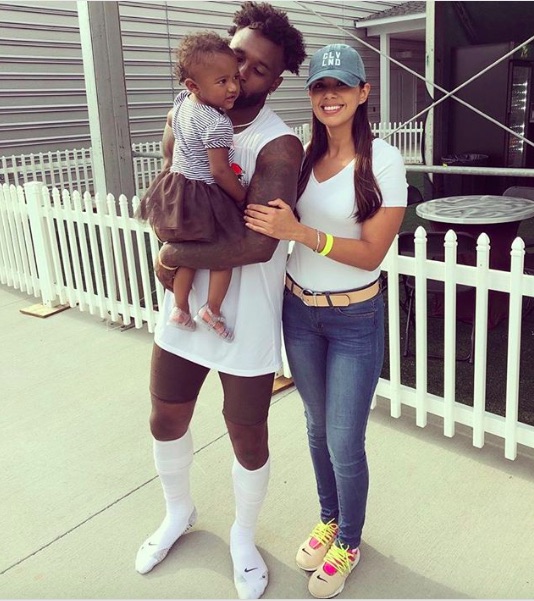 CAPTION: Jarvis Landry with his girlfriend and daughter SOURCE: Pinterest

Jarvis was almost accused of domestic violence when an unknown caller informed the police that he was attacking his girlfriend, but Estrella came up and told the police that it was only a vocal disagreement "and nothing else.

The success of Landry not only because of the talent but also from the right decisions, hard work, and the right company. Talk about the right company, Landry is Odell Beckham Jr.'s best friend, one of America's highest-paid recipients.

Jarvis Landry was born on November 28, 1992, in Convent, Louisiana. Further, he was raised by a single mother Dietra Landry. As per his nationality, he is American and belongs to the African ethnic group. Further, his star sign is Sagittarius. He grew up along with his sibling, Gerard Landry.

In the second round( 63rd overall) of the 2014 NFL draft, Landry was drafted by the Miami Dolphins. He played for the team for 4 seasons. Landry joined a receiving unit with Mike Wallace, Richard Matthews, Brian Hartline, and Brandon Gibson as a rookie.

Landry started season 2017 with a new quarterback, Jay Cutler, due to an offseason ACL injury to Ryan Tannehill.  On March 9, 2018, the Dolphins agreed to trade Landry with the Cleveland Browns for the 2018 fourth-round draft pick of Cleveland.