Janne Andersson was born Jan Olof "Janne" Anderson on September 9, 1962, in Halmstad, Sweden. He is the son of Gunni Andersson and his wife. Janne rose to fame only after his successful career so, much information about his early life is under the radar.

Janne started his career as a player for Alets IK in Division 5 club football. He played with the team from 1979 until 1986. He then moved to IS Halmia for a season. In 1988, Andersson started working as a player-manager for Alets IK. In 1990, He joined Halmstads BK and worked as assistant manager.

In 2011, IFK Norrkoping signed him as their new head coach. He worked with the team until 2016. Then, he led Norrköping to win the league for the first time in 26 years. The same year, Sweden hired him as their national team head coach. In 2018, UNder his leadership, Sweden qualified for its first FIFA World Cup in 12 years by eliminating the Netherlands and Italy during the qualification process.

In 2019, Janne was named Coach of the Year Award at the Swedish Sports Awards. The following year, Sweden qualified for its sixth consecutive UEFA European Championship. In May 2020, Sweden extended their contract with Janne until 2024.

Janne is married to his long-time girlfriend, Ulrika Andersson. The duo tied their wedding knot in 1991. Shortly after the wedding, The love birds welcomed their first child, a daughter, Julia Andersson. The head coach does not show much presence on social media. However, he has become successful in keeping his personal life away from the press.

How Rich is Janne Andersson? Know About His Net Worth, Salary, and Contract

Janne Andersson has an estimated net worth of more than $1 Million. He has accumulated most of his net worth through his successful career as a football player and coach. In 2018, As per sources, Janne earned $521,935 as his salary for working as the head coach of Sweden. However, he was ranked among the lowest-paid coaches leading a World Cup team in 2018. 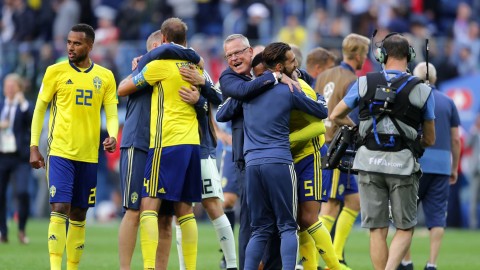 Janne celebrates along with his players after winning a game in FIFA 2018 SOURCE: FIFA

Janne has an annual salary of $520,000 with his national team. Before resigning as the head coach of Germany, Joachim Low was the highest-paid head coach for Germany until 2020.