Jamie Carragher is one of the renowned names in the world of football. Currently, he retired from his playing career. He played 17 years of career as a defender for Premier League club Liverpool. Currently, he works as a pundit on Sky Sports. Internationally, he represented England at the 2004 European Championship and the 2006 FIFA World Cup, before took retirement from international football in 2007.

How Much Is Jammie Carragher Net Worth In 2019?

Jammie Carragher has an estimated net worth of $21 million as of 2019, including all of his properties and earnings. Earlier, his net worth was reported $15.6 million as of May 2012.

He used to receive an annual salary of $5 million while he was at Liverpool. Jamie Carragher is thought to be on a staggering £1million salary working at Sky Sports.

Jamie Carragher is one of the valuable assets of the football world. He has reached the age of 39 now. He has a perfect height of 6 ft, which is around 1.83m. His salary is outstanding. He has an estimated net worth of $21 million. He is being followed by his fans on social networking sites.

Jamie Carragher personal life is as perfect as his career. He married his longtime girlfriend Nicola Hart in 2005. Since getting married to till date, the lovely couple is living happily as a husband and wife. There is no rumor of separation between the lovely couple. 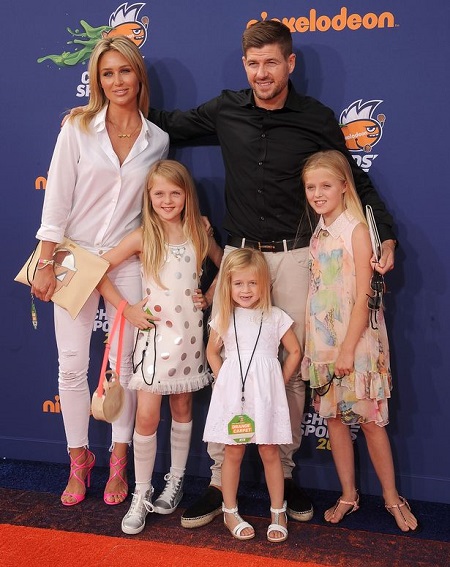 Jamie Carragher is the philanthropist. He has always been involved in social and charitable work. For his charity work, he was honored by the Freedom of the Borough of Sefton. Occasionally, he visits schools as a part of his charity work. in 2008, his autobiography Carra was released.

Jamie Carragher was born on 28 January 1978 in Bootle, Merseyside, England. Regarding his nationality, he is English. His ethnicity is white. His star sign is Aquarius. Jamie Carragher was a fan of Everton while growing up. His father was also an Everton fan. As a youth, he played with Everton and Liverpool.

In 1996, Jamie Carragher had his first appearance for the England U-21 side. He played as a defensive midfielder and eventually holds the position of captain. On 28 April 1999, he made his debut for England Senior team. He came as a substitute against Hungary. In 2001, he made his full international debut against the Netherlands at White Hart Lane. He was involved in an on-field clash with fellow defender Álvaro Arbeloa, and the two had to be separated by teammates Steven Gerard and Fernando Torres.

Jamie Carragher played as an attacking midfielder in his early days and been a striker in his childhood, but he soon he learned the art of defending. He was very aggressive and attacking when he was in the field. After his retirement in 2013, it was announced that Carragher had signed a contract to join Sky Sports as a pundit alongside Graeme Souness, Gary Neville, and Jamie Redknapp.

Following retirement from playing career, Jamie Carragher agreed on a contract to join Sky Sports as a Pundit. He joined alongside with Graeme Souness, Gary Neville, and Jamie Redknapp. He also serves as an occasional sports columnist of Daily Mail. The Daily Mirror published a video showing Carragher spitting at a car carrying a man and 14-year-old girl after covering Manchester United's 2-1 win over Liverpool for Sky. He was suspended by Sky Sports and removed from Danish channel TV3 Sport's upcoming coverage the following day, his suspension lasted for a year.