James Bryce Whitford a.k.a. James Whitford is an American college basketball coach currently serving as the head coach of the Ball State Cardinals men's basketball program, a position he held since 2013. Early in his coaching career, he served as an assistant for Miami (1997-2005), Xavier (2005-2009), and Arizona (2009-2013).

Madison, Wisconsin native, James Whitford was born on 23rd July 1971, under the star sign Leo. The fifty years old holds an American nationality and is of white ethnic background. He is a graduate of the University of Wisconsin–Madison with a bachelor's in political science in 1994.

How Much Is James Whitford's Net Worth In 2022?

James Whitford has married twice, He first tied the knot with Amber Stocks, also a basketball coach who was head coach and general manager of the Chicago Sky in the Women's National Basketball Association (WNBA).  The duo met through Ohio State women’s basketball coach Kevin McGuff.

Shortly after James and Amber got engaged, the couple moved to downtown Cincinnati after Whitford accepted an assistant coaching job at Xavier. This is where they learned to work together and to support each other in their respective careers. 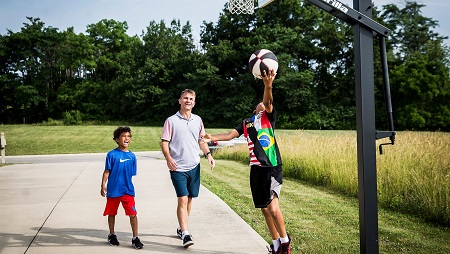 James Whitford with his two sons SOURCE: The Star Press

While still pregnant, Amber Stocks continued coaching and when Liam was born, James would bring him to Stocks during halftime to be fed. When James took the Arizona job, the family relocated to Tuscon. At the time the family became four and Stocks put her coaching career on hold to raise the kids.

In 2015, the couple divorced after a 10-year marriage. Though appeared, they are in a friendly relationship and have 50-50 custody of their children.

As reported, James has remarried.

In 2005, Whitford joined Xavier where he spent four seasons under head coach Sean Miller. In 2009, he followed Miller to Arizona. Following two seasons at Arizona, he was promoted to associate head coach. In April 2013, he became the head coach at Ball State Under his belt, he led the championship to 3X MAC West Division.