James Earl Conner is an American footballer, born on May 5, 1995. He is a phenomenal American running back for the Pittsburgh Steelers. He played college football for Pittsburgh and was picked up by the Steelers in the third round of the 2017 NFL Draft. For 2014, he received the AFCA First Team All-American Awards and was named the ACC Player of the Year.

Even, in quarantine, he made a huge buzz in the media, for spending quality family and buying his mother a home in a more civilized area and for buying his dad a sexy black truck. His actions showed how to stay sane in a hugely unprecedented time; which also shows the player's winning mentality. He is also famous for his haircut which is termed as mullet. During the 2019 season, he flaunted a unique haircut that looks short in the front and bushy in the back. So, without a delay, let's quickly know his personal life, net worth, career highlights, and his relationship with his parents and siblings here! Let's begin with his net worth:

Blessed with tremendous athletic abilities and extra-ordinary work ethics, Pittsburgh Steelers Running back James Conner has so far bagged $1.74million from his two seasons as a rookie with Steelers. Bagging a whopping $755K in 2018, he is ranked as 63rd among highest-earning runningbacks and is 1082nd highest earners in the NFL.

He is only 25 and has registered himself in the millionaire's club earning $3.183 million from his three seasons. Likewise, he still has a year-long contract with Pittsburgh Steelers, and as the club is adding 15% to his salary every year, if he desires to extend his contract by the end of 2025, he would be bagging over $13 million by the end of 2025.

Sports site behindthesteelcurtain, has also predicted a similar career growth for the running back, the rookie deal is expected to expire in 2022, and by then he would have earned over $3 million

As per his recent contract, RB James Conner's current networth is expectedly around $3 million, but as he ends 2025 season his market value will be somewhere around $10 million.

What he does with his money should completely be his business but in the midst of Covid-19 outburst, he took time to buy his Pensilivenia based mother Kelly Bibbs, her dream house. The story was highlighted on RB's Instagram on American Independence day, where he along with his three sibling brothers were seen welcoming their mom to her new home in a more sound neighborhood.

So, what did he buy for his father? Well, the dude has got a heart of gold, Steelers playful RB On 7th of June had surprised his father with a black truck and his dad was sheen rather surprised to see his son out of nowhere hand him a key to his favorite family ride.

This also shows the level of success this 25 years old NFL star has earned in his three years long career. So, if you don't think that he is loaded, then you don't know anything about the finances.

Further, he also earns royalty as an author-publisher, as he has published his autobiography, titled: Fear Is A Choice, which he wrote alongside Harper Collins.

James Conner was brought up by his parents, Kelly Patterson and Glen Conner Sr., and is the youngest of five siblings. The brothers are Glen, Mike, Michael, and Rico. Glen, Richard, and Michael are blood-related, while Rico is the stepbrother of his mother's second marriage.

From the start of his season, Conner was a prospect of McDowell High School in Erie, Pennsylvania. In his school career, he played back as a runner and defensive player on the Trojans soccer team. During his senior season, he shocked everyone with 1,680 yards on 155 hauls and 26 touchdowns. After a good high school football career, he entered the University of Pittsburgh in August 2012, majoring in communication.

He started playing the3 college game right as a freshman and appeared in 12 out of 13 college games in his debut season. He opened against Florida State but the team faced loss despite his eight carries for 34 yards.

He scored his first career touchdown against New Mexico the next week, ending the game with 12 wins, 119 rushing yards, and a season-high two touchdowns. On December 26, 2013, Conner had a season-high 26 goals for 226 yards and a touchdown during a 30–27 win over Bowling Green in the Little Caesars Bowl, he was voted the 2013 Little Caesars Pizza Bowl MVP. He led the team in rushing yards with 799 and rushing touchdowns with eight. In his very first college season, Conner broke Tony Dorsett's school record of racing yards in a bowl game with 229 racing yards.

In his second season, Conner started his sophomore season rushing on 14 carries for 153 yards and scored a season-high four touchdowns in the 62–0 season-opening victory over Delaware. Conner hastened for a career-high 263 yards with 38 runs for November 1, 2014, and earned three touchdowns with Duke No. 24 in a 48-51 double-overtime defeat.

The next week, with 30 carries for 220 yards and career-high-tying four touchdowns in a loss to North Carolina, he reached 200 yards rushing for a second consecutive season. In its 2014 sophomore season, Conner made 298 attempts at 1,765 yards and set an ACC record with 26 rushing touchdowns. He led the ACC in the rushing yards, finishing 7th in the FBS. People believe the 2014 college football season was his best college season. Closing 2014, he was named the ACC Player of the Year and garnered AFCA first-team All-American honors.

2015's College Football season made him an Inspiration for Cancer Patients:

Conner revealed on 4 December 2015 that he had been diagnosed with Hodgkin's lymphoma. Notwithstanding this, he said:

"I chose not to fear cancer...I'm going to play football again."

During his third college season, he at first, tore his MCL in a winning match against Youngstown State, Conner started attending therapy and began to experience extreme exhaustion and after he was x-rayed he was diagnosed with Hodgkin's lymphoma.

He underwent 12 rounds of chemotherapy and finished his last appointment for chemotherapy on 9 May 2016. Conner continued to engage, as much as his body would allow, in non-contact drills with the Pittsburgh Panthers football team during his recovery. Conner announced he was cancer-free from on Twitter on 23 May 2016.

After completing 16 touchdowns and 3,733 yards, he announced that he would be applying for early eligibility in Pittsburgh Steelers and applied for the draft in January 2017 and was picked in the third round by the Pittsburgh Steelers.

Conner made his NFL debut in the season-opener at the Cleveland Browns and scored a 21–18 victory for four goals in 11 yards. In Week 4, he had four season-high 26 yards in a 26–9 victory at the Baltimore Ravens. On 29 December 2017, he was placed in a wounded reserve due to an MCL injury that required surgery. Conner finished his rookie season with 144 racing yards on 32 carriages with no touchdowns.

In 2018, he gave his best performance earning his first touchdown against Seattle Seahawks. Conner in 2018 season appeared in 12 out of 13 games, covering 973 yards, assisting 30 long passes, and registering 12 touchdowns. Though 2019, came as a bummer where he injured his knee, prior to his exit, he scored his first rushing touchdown against Seattle Seahawks. Steelers suffered a heavy loss in the absence of their best running back. In 2020, Seattle Seahawks' RB has been preparing for the upcoming season in Quarantine.

As James Conner is available on Instagram and Twitter, he is seen sharing his workout videos and is often seen socializing with various football stars as well. He is usually seen spending his vacation with his family but rarely shares details about his girlfriend. He once outed that he has a girlfriend on Ellen's show and keeps popping up with his bae, on paparazzi cameras, but rarely talks about her, publicly. 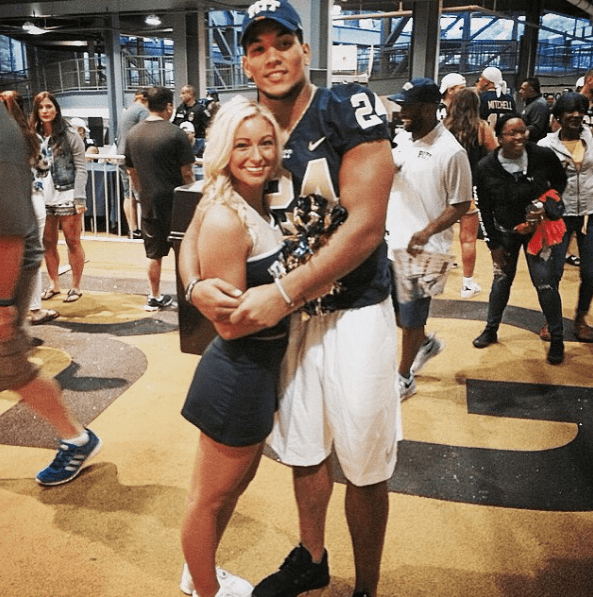 He reportedly met his girlfriend while they were in college. His girlfriend Sarah Quinn was in his college cheerleading team and they are together up until this day. Professionally, she is a former Pitt cheerleader currently working as a registered nurse and their love grew even stronger when Conner was diagnosed with Hodgkin's lymphoma.

For more, on NFL updates keep up with Playerswiki.