If you love watching American Football then, Jameis Winston must not be a new name. Jameis Winston is a well-known American football player. He has been playing as the quarterback for the New Orleans Saints in the National Football League. Winston finished his Amateur career with more than a dozen of awards and finals to his name. Jameis played Baseball and American Football simultaneously in his High School Career.

Jameis Winston was born Jameis Lanaed Winston on January 6, 1994, in Bessemer, Alabama. He is among the two children born to Antonor Winston and his wife, Loretta Winston. His father was an MLB player, and his mother remained at home looking after their children. He has a younger brother named Jonah Winston. Jameis graduated from Hueytown High School and enrolled at Florida State University. Jameis stands six feet and four inches tall and weighs 105 kg ( 231 lb).

Jameis Winston has an estimated net worth of more than $20 Million. Winston has been playing in the NFL for more than five years. He signed his first multi-million contract with Tampa Bay Buccaneers in 2015, worth $23.35 Million. Jamies received $16.7 Million as his signing bonus. As Winston was good at baseball, His contract did not allow him to play any other sports than Football. 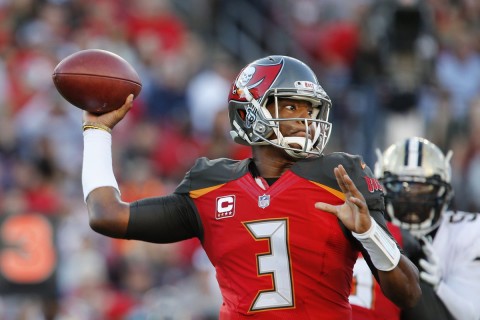 Jameis has extended his contract with Saints SOURCE: Bucs Nation

From his four years with the franchise, Winston earned a total of $25,351,277, which included his bonus prize money. In 2020, Tampa did not extend his contract, and He signed a one-year deal with the New Orleans Saints. His contract had a value of $1.1 million, including his base salary of $952,000 and a signing bonus of $148,000 with a possible $3.4 million in incentives.

In early 2021, the Saints extended their contract with Jamies for a year. As per sources, The one-year extension is worth up to $12 million. He is going to be part of the team along with Alvin Kamara and Taysom Hill.

Who is Jameis Winston's Wife? Know About His Relationship Status

Jameis is a married man living a happily married life along with his wife and their children. Winston tied his wedding knot with his longtime girlfriend, Breion Allen, in April 2020. The love birds had a private wedding ceremony at their home in Odessa, Florida. The duo first met each other at their High School and have been together ever since. 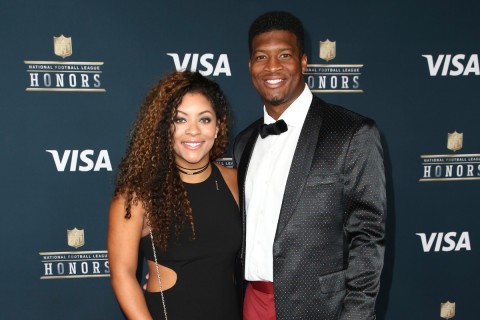 CAPTION: Winston along with his wife attending an event SOURCE: Getty Images

The love birds got engaged in May 2018 in front of their family and some close friends. In July 2018, Winston and his fiance welcomed their first-child, Malachi. They shared the news through a post on their Instagram.  In late 2020, Winston opened about expecting a baby shortly. Jameis and Breion were blessed with a baby boy, Taurus.

Winston was rated as the best overall quarterback recruit by ESPN. He was regarded quarterback in high school and led his team to the state championship as a junior. He also played for the Baseball team in his University team. Tampa Bay Buccaneers drafted him as the first overall pick in the 2015 NFL Draft.

Jameis was named to the NFL All-Rookie Team for his 2015 season. Winston was selected to his first Pro Bowl game, making him the first rookie quarterback in Buccaneers' history. He ranked in the NFL's top 100 players of the 2016 season. In the 2017 season, The player suffered an apparent right shoulder injury. Winston finished the 2017 season with 3,504 passing yards, 19 touchdowns, and 11 interceptions.

In 2019, Winston became the first quarterback in Buccaneers franchise history to pass for 100 touchdowns in a career. At the starting of the 2020 season, Jameis underwent surgery to repair a torn meniscus. New Orleans Saints signed him for one year.  In early 2021, the Saints extended their contract for one year with Jameis.