2020 Jordan Brad Classic, Jalen Johnson is an American college basketball player who is currently playing side the Duke Blue Devils of the Atlantic Coast Conference (ACC), representing Duke University. He playing high school basketball at Nicolet High School where he was a consensus five-star recruit and one of the best small forwards in the 2020 class.

Wausau, Wisconsin native, Jalen Johnson was born on 18th December 2001, under the star sign Sagittarius. As per nationality, he is an American and is of white ethnic background. Further, the nineteen years old stands 6 ft 9 in (2.06 m) and weighs 220 lb (100 kg).

Born as the middle of three sons to Stacy Johnson and Rod Johnson Sr., Jalen started playing basketball as soon as he could walk. He says, "I was born with a basketball in my DNA.”  The whole Johnson family played basketball. Father, Rod Johnson Sr., was a collegiate player at the University of Wisconsin Milwaukee and Southeast Missouri State University who also played two seasons in Poland. Similarly, my mother, Stacy Johnson, played college basketball at the University of Wisconsin Milwaukee. 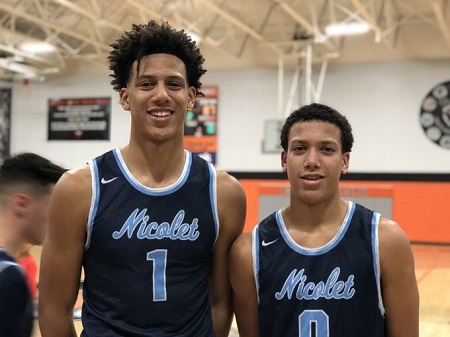 The elder brother, Rod Johnson Jr., played basketball at Highland Community College and now at the University of Tennessee Chattanooga. His younger brother is Kobe Johnson, who is currently playing for Nicolet High School and reportedly committed for USC.

Later, he transferred to Nicolet High School for his junior year. Further, he was transferred to IMG Academy for senior years where he averaged 24.6 points, 10.9 rebounds, and 4.8 assists in 9 games. He was selected to play in the Jordan Brand Classic, which was canceled due to the COVID-19 pandemic.

Over the offers from Wisconsin, Arizona, and Kentucky, Johnson committed to play college basketball at Duke University. On 28th November 2020, he made his college debut where he had 19 points, 19 rebounds, and four blocks in an 81-71 win against Coppin State.

A matter of fact, college athletes do not get a salary from colleges. Many, but not all, get a full ride to college they play for. Most of these college athletes will not make it to the NBA or competitive international leagues. To get a free education is a HUGE incentive to play ball.

According to ESPN, Jalen ranks as the No. 5 prospects in the 2021 NBA draft rankings. The average NBA player salary is $7.7 million per season.

No. 1 – Duke Blue Devils' small forward, Jalen Johnson is pretty famous on Instagram with 108k followers. His fan followers seek posts of his girlfriend or love life but sadly there is none. Almost all of his IG posts are with his first love, basketball.

Not to mention, Jalen has maintained his love life low key. With less to no information, he is possibly single.