A Polish footballer, Jakub Kaminski has been playing football professionally since 2010, and since July 1, 2022, Kaminski has been representing Bundesliga club VfL Wolfsburg. Apart from that, Kaminski is also a national player who plays for the Poland national team.

Furthermore, Kaminski plays as a midfielder. As he is one of the most skilled players on his team, Kaminski can also take the role of right winger and left midfield. In his current squad, Kaminski is wearing jersey number 16.

Jakub Kaminski's Relationship With His Girlfriend

Starting the topic with his love life, Kaminski is currently in a relationship with his stunning girlfriend. At the moment, the name of his girlfriend is missing from the web as Kaminski has not given much info about her. So, it is believed that the footballer is a very private guy, and rather than sharing the information with the media, he likes to keep it confidential. On May 25, 2022, Kaminski posted an image with his girlfriend on Instagram, which was loved by many people. It can be said that Kaminski and his lover have been dating each other for quite a while now. Their bond is also growing stronger, and both of them are living happily in private.

In the future, Kaminski may give more updates about his love life. So, to get updated on his life, we can follow him on Instagram under the username @jakub.kaminskii.

VFL Wolfsburg footballer Kaminski makes a massive amount of money from being a professional football player. As we know, he currently plays for Bundesliga club VfL Wolfsburg. According to Transfermrkt, he has signed a massive deal with his current team worth €10.00m, and we can say that he is taking home a decent salary.

His contract with Wolfsburg is until 2027, and from this, it can be speculated that Kaminski's income will skyrocket in the future. Not to mention, Kaminski's current market value is €10.00m. Likewise, Kaminski has played in various games with the national team and might have taken home a good cash prize. In addition to that, Kaminski makes money from sponsorship and endorsement deals. Currently, he is working with BMG Sport, and Kaminski has also collaborated with Adidas.

Kaminski started playing football in 2010 when he joined the youth team of Szombierki Bytom. For the respective team, he played until 2015 and moved to Lech Poznan. After that, he spent most of his early career there. Meanwhile, Kaminski's senior career started when he moved to Lech Poznan II in 2019. 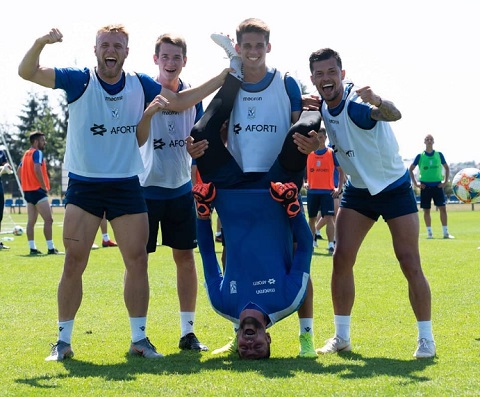 Talking about his international career, Kaminski made his debut for the national football team of Poland on September 5, 2021. Before that, Kaminski played for the youth teams in numerous matches.

You May Learn: Arkadiusz Reca

Have a Look at His Family Background & Early Life

Jakub Kaminski comes from a superior family whose parents have supported him since the beginning of his career. He was raised by his parents in Ruda Slaska, Poland. So, Kaminski holds Polish nationality.

We are unknown whether Kaminski is the single child of his parents or he has siblings. Furthermore, the 5 feet 10 inches tall football keeps his family details away from the public domain.