Jakob Poeltl is an Austrian professional basketball player. He currently plays for the San Antonio Spurs of the National Basketball Association (NBA).

Poeltl played college basketball for the Utah Utes. During his sophomore year, he won Kareem Abdul-Jabbar Award as well as a Pete Newell Big Man Award. Poeltl was drafted by Toronto Raptors with 9th overall pick in the 2016 NBA draft.

Jakob Poeltl was born on 15th October 1995, in Vienna, Austria. Both of his parents were the members of the Austrian national volleyball teams. Poeltl was raised by his mother Martina Pöltl. Poeltl belongs to an Austrian nationality. He completed his graduation from the University of Utah.

Until the 2013 FIBA Europe Under-18 Championship, Jakob Poeltl was relatively unknown in the United States. University of Utah assistant Andy Hill, developed an interest to select Poeltl after seeing his 15-rebound performance in a tournament in Macedonia.

After averaging a double-double in points and rebounds in the tournament, Poeltl was named to the second all-tournament team. In his first game in the first year at college basketball, he scored 18 points and had 10 rebounds. Poeltl won Pete Newell Big Man Award as well as the Kareem Abdul-Jabbar Award.

In the 2016 NBA draft, he was drafted by Toronto Raptors with 9th overall pick and signed a four-year rookie contract 9th July 2016. However, on 18th July 2018, Poeltl traded to San Antonio Spurs along with DeMar DeRozan in an exchange of Kawhi Leonard and Danny Green.

Poeltl is much more secretive regarding his personal life. Even being such a well-known basketball player, Poeltl often keeps his personal details away from the public. However, Jakob Poeltl is not married so far. Likewise, he is not dating anyone at the current moment. Similarly, there are no any records as well as rumors his relationships and affairs. 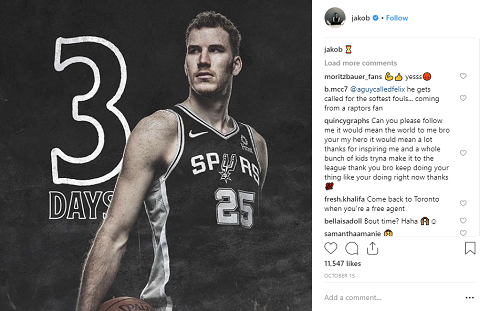 Poeltl is active in social media including Instagram, Facebook, and Twitter but yet, he hasn't shared photos of girls which make people doubt about his current relationship status. As Poeltl is not married and hasn't dated anyone, his sexuality is straight. Poltel might be focusing on his career rather than being involved in any kind of personal stuff.

Also Read: Kawhi Leonard is in Relationship with Kishele Shipley. Are they Engaged? Know about their Dating

Jakob Poeltl Net worth and Salary

Jakob Poletl earns a decent amount of money from his professional basketball career. As of 2018, the estimated net worth of Poeltl is around $5 million. Poeltl currently plays for the San Antonio Spurs as their center. On 9th July 2016, Poeltl signed a four-year contract with the Toronto Raptors for $12,231,806.

The contract included an average annual salary of $3,057,952 and the base salary of $2,947,320. Moreover, Poeltl might have added further money from his college basketball career.