How Much Are Jack Hager’s Net worth and Salary In 2019?

Looking at his professional career as an MMA fighter and a wrestler, Jake Hager's net worth is assumed to be in the region of $ 1.5 million, as of 2019.

His annual salary was estimated to be around $270,000 while he was in WWE. He also revealed that he is earning more than WWE in Bellator and is satisfied with his living.

Matter of fact, there is no fixed salary in the MMA industry. The fighter earns as per fight.

The 6 feet 7 inches tall and weighing around 120 kg, Jack Hager is happily married to his longtime girlfriend, Catalina White on December 2010. 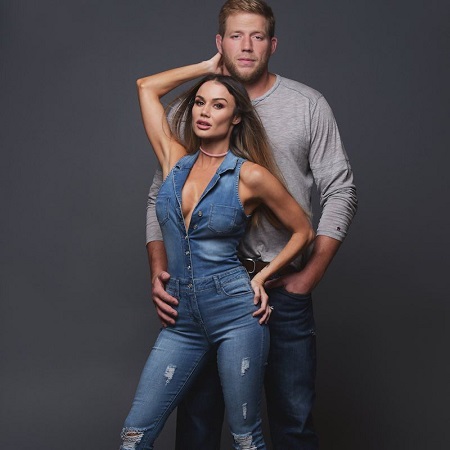 He is currently residing in Tampa, Florida with his family and is not rumored to be in any sort of affairs and extra affairs from him or his wife.

The family of Hager is enjoying a nice and blissful life.

Jack Hager was born on 24 March 1982 in Perry, Oklahoma, United States of America. He holds an American nationality.  He was highly interested in wrestling since he was five years old and got his training with Danny Hodge’s grandson.

Hager wrestled and played American football and was also class president at the University of Oklahoma where he received his bachelor’s degree in finance from.

He worked for a firm in Dallas before he was signed by the WWE.

Jake Hager had a tryout in Deep South Wrestling in September 2006 and later moved to Ohio Valley Wrestling.  He then competed for WWE’s developmental territorial organization, Florida Championship Wrestling in 2007.

He went make his WWE debut on its ECW brand on September 9, 2008, under the ring name Jack Swagger and later on to win the ECW Championship by defeating Matt Hardy on January 13, 2009.

Hager made his official WWE Debut on Raw by facing off against Randy Orton.

He participated at Money in the Bank Ladder Match in WrestleMania XXVI and won the match.

Hager on cashed the Money in the Bank contract on Chris Jericho and won the WWE world heavyweight championship.

He went on to successfully defend his little against wrestlers such as Chris Jericho, Edge, Randy Orton, and Big Show before the title against Rey Mysterio.

Hager won the United States Championship against Zack Ryder and later formed alliances with wrestlers such as Dolph Ziggler and Antonio Ceasro.

He was left WWE in March 2017 and went to compete for several wrestling independent circuit.

He officially announced that he signed with American MMA promotion, Bellator MMA in the promotion’s heavyweight category.

On January 26, 2019, Hager made his Bellator debut against J.W. Kiser at Bellator 214. He won the fight via Submission (arm-triangle choke) in round 1. Further, he defeated T.J. Jones at Bellator 221.