Jaelan Phillips is an American football outside linebacker for the Miami Dolphins of the National Football League, the 18th pick of the 2021 NFL Draft. He finished his collegiate career at UCLA (2017–2018) and Miami (FL) (2020).

Phillips was born on May 28, 1999, in Redlands, California. He attended Redlands East Valley High School, where he recorded 264 tackles, 31.5 sacks, 3 forced fumbles, and 3 interceptions. He was considered the top high school prospect from his high school days having received over 20 scholarship offers.

Phillips formerly played for UCLA's men's football team, the UCLA Bruins football. As Bruins' true freshman, he played in seven games and contributed 12 tackles (seven for loss), 2 pass deflections, and 3.5 sacks. In his sophomore year, he was lined up in four games before halting his allegiance with the game due to concussions. 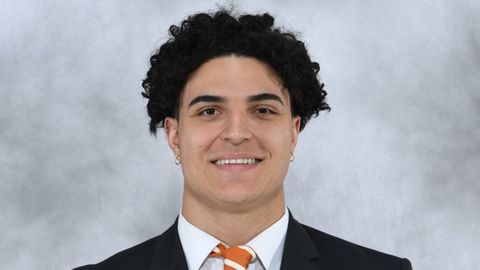 Jaelen Philips was drafted by the Miami Dolphins in the first round of the 2021 NFL Draft SOURCE: University of Miami

After spending two seasons with the Bruins, he moved to Los Angeles City College to study music production.  He took a break from football after the 2018 season due to several concussions and other injuries (resulting from a moped accident).

In 2019, Phillips enrolled at the Frost School of Music of the University of Miami, where he would also return to football and play for the Miami Hurricanes. In 2020, the 6 foot 5 defensive-end racked up eight sacks, 15.5 tackles for loss (45 overall), and thwarted four passes including his first career interception. He registered 42 pressure on 286 pass-rush snaps - one pressure for every 6.8 drop-back snaps.

He was named a second-team All American and All ACC. In the first round of the 2021 NFL Draft, the Miami Dolphins selected Philips with the no 18 overall pick.

How Much Is Jaelan Phillips Net Worth In 2021? Contract & Salary

The signing bonuses for the rookie NFL players are typically paid out within the days of the athlete's official recruit. That implies the former Hurricanes edge is already entitled to a net worth of $7million. If Phillips isn't cut by the Dolphins and goes on to perform well on the field, he could own a good fortune worth anything from $10million to $20million - in the aftermath of the next five years with the Fins.

Phillips marked one year of dating a college soccer player, Morgan Ledenko on September 10, 2020. She is a native of Rancho Santa Fe, California, and plays as a defender for the Miami Hurricanes Soccer team.

The pair have been spotted together on several occasions. Throughout the year 2020, the young couple was pictured enjoying their holidays in the Bahamas, Chelan, San Diego, Key Biscane, and several other beachy locations.

It has been reported that Phillips suffered his first concussion at the age of 10 - and how that was one of the reasons he stopped playing football at UCLA.