J'Kaylin Dobbins a.k.a. J.K Dobbins is an American football running back signed to the  Baltimore Ravens of the National Football League (NFL). He finished his collegiate career at Ohio State and was picked by the Ravens in the second round of the 2020 NFL Draft.

Houston, Texas native, J.K. Dobbins was born on 17th December 1998, under the star sign Sagittarius. The twenty-two years holds an American nationality and is of Afro-American ethnic background. He stands 5 ft 10 in (1.78 m) tall and weighs 212 lb (96 kg).

Dobbins's father, Lawrence Dobbins, was also a star running back at La Grange High School which he earned admission to Lincoln University in Philadelphia as a track & field athlete, but didn’t feel as passionate about the sport as he did for football, hence dropped out college prior to his senior year. 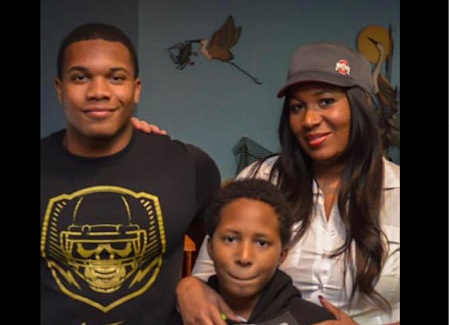 Unable to carry a constant job, Lawrence got connected with the wrong kind of people which eventually led him to be convicted for theft of property and sentenced to two years in state prison in 2012. While incarcerated at Bartlett State Prison, Lawrence suffered a stroke and died on February 13, 2014. Dobbins was only 14 years old.

His mother is the greatest support system to Dobbin who made sure his football career did not follow the path of his father.

Coming to relationship and love life, Dobbins has not mentioned one in the public. He is believed to be possibly single.

Dobbins enrolled at  La Grange High School where he had 5,149 yards and 74 touchdowns. a highly-touted four-star prospect, he received over twenty scholarship offers from Power Five conferences. He was a top-50 recruit in the country by 247Sports and ESPN.com.

He committed to  Ohio State University to play college football. During his freshman season, he eclipsed 100 rushing yards in six games, becoming only the fourth freshman in Ohio State history to eclipse the 1,000-yard rushing mark in a season. He ended his sophomore season with 1,053 yards rushing but remained the team's leading rusher. Notably, he had his first 200+ yard rushing game against Maryland.

Similarly, he concluded the junior season as the only Buckeye in history to rush for more than 2,000 yards in a season. On December 30, 2019, Dobbins announced his intention to forgo his senior season and enter the 2020 NFL Draft.

In the 2021 NFL Draft, Dobbins was selected in the second round of the 2020 NFL Draft with the 55th overall pick by the Baltimore Ravens. On 12th September 2020, he made his NFL debut against the Cleveland Browns, where he scored his first two career rushing touchdowns in a 38–6 victory in Week 1.

Dobbins suffered a torn ACL in a preseason game against the Washington Football Team, ending his 2021 season.