J. J. Barea is a Puerto Rican professional basketball player. He currently plays for the Dallas Mavericks of the National Basketball Association (NBA). He was also a member of the Puerto Rican national team when it won a gold medal in the 2006 and 2010 Central American and Caribbean Games.

J.J. Barea Net worth and Salary

Being such a well-known and skilled basketball player, Barea earns a good sum of money from his profession.

J.J. Barea was previously in a relationship with Miss Universe 2006 Zuleyka Rivera. The couple began dating in March 2011. From their relationship, the duo has a son Sebastián José Barea Rivera born on 17th February 2017.

However, Barea and Rivera failed to continue their relationship and separated in April 2013.

Barea next began dating his current wife Viviana Ortiz who is an actress and Miss Universe Puerto Rico 2011. In February 2016, the pair confirmed that they were expecting their first child.

They welcomed their daughter Paulina Barea Ortiz on 31st March 2016. Likewise, the lovebirds exchanged their vows on 20th August 2016.

Their wedding was held at the church of the Universidad del Sagrado Corazón in San Juan, Puerto Rico. 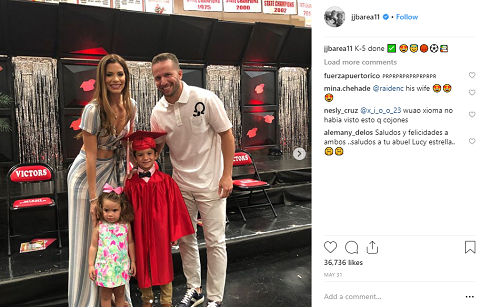 Since their wedding, the husband and wife are together and are still going strong in their relationship. They are maintaining a peaceful relationship without any signs of divorce and extramarital affairs. Barea frequently shares adorable photos of his spouse and children on his Instagram.

J.J. Barea was born to mother, Marta Barea, and father Jaime Barea and grew up along with his brothers Jamie J. Barea and Jason J. Barea. He holds a Puerto Rican nationality. 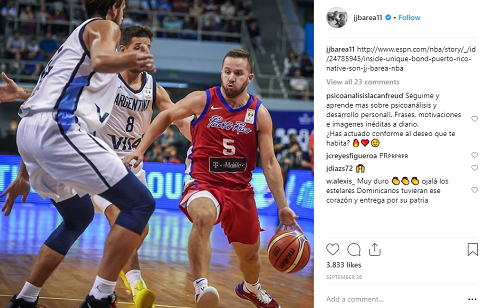 J.J. Barea played college basketball for the Northeastern University team. He averaged 17.0 points, 3.0 rebounds, 3.9 assists and 1.9 steals as a freshman and earned third-team All-AEC and AEC All-Rookie team honors. Likewise, during his sophomore year, he earned All-AEC honors and further played for the senior team.

However, from 2011–2014 season, Barea played for Minnesota Timberwolves. Barea returned to Mavericks on 29th October 2014. Moreover, he re-signed a four-year contract with the club on 16th July 2015. Besides his club career, Barea is also a member of Puerto Rico's National Basketball team.