Ivo Grbic is a rising Croatian professional football player. He is currently playing in the Spanish Football League, La Liga for Atletico Madrid. Grbic spent his 2021 season with Lille in Ligue 1. Grbic plays as a goalkeeper for his club and country. Ivo turned professional in 2014.

Ivo Grbic was born on January 18, 1996, in Split, Croatia. He is the son of Josip Grbic and his wife. His father was the acting president of Hajduk Split during the 2010–11 season and passed away in 2016. Talking about his physical appearance, Ivo stands six feet and five inches tall and weighs 83 kg.

Ivo Grbic's Net Worth in Millions

Ivo Grbic has an estimated net worth of more than $1 Million. The player credits most of his net worth to his successful football career. The Croatian player has played professionally for more than seven years. Grbic is signed with one of the highest-paying clubs in the world. Ivo must be making a handsome amount from his sponsorship and advertising deals. 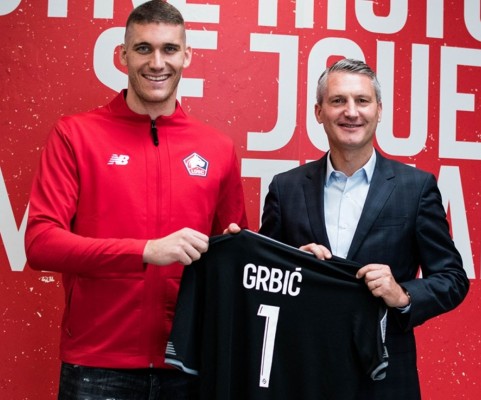 Ivo played with Lille in Ligue 1 for the 2021 season SOURCE: Lille.

Ivo signed a  four-year contract with Atlético Madrid in a transfer worth €3.5 million, including additional bonuses and a percentage of the next transfer. He has a base salary of €1.44 million while playing for Atletico. Grbic has a market value of €5 million. Ivo is very early in his carer and will be making millions in the future. Joao Felix is the highest-paid player for the club, and Oblak makes €18 million as his annual salary.

Ivo is an active social media user. Following his Instagram timeline, we can ensure that The Croatian professional football player is single in early 2022. The player has not shared a photo with any girl in public. There is no rumour of his dating. Grbic is very early in his career and must focus on his career.

Ivo started training with the youth academy of Dalmatinac Split in 2005. He played with the team for a season and then moved to Hajduk Split. The player represented the club in numerous divisions and earned his senior team call in 2014 and his debut in October 2014. Ivo played for the Hajduk Split II team for most of his time with the club.

Ivo was signed as the reserve goalkeeper, but he only made his debut on April 18, 2015, in the home defeat to Rijeka. The player signed a four-year contract with the club and appeared in seven games for the senior team. Splits offered him several offers to extend his contract but moved to Lokomotiva in 2018. After the team made it into the  Champions League second qualifying round, he became a key player.

In August 2020, Grbic signed with Atletico Madrid on a four-year contract of more than €3.5 million. He was loaned to Lille for the 2021 season. The player appeared in twenty-one games for the club. Grbic is yet to make his debut for Madrid.