Isaiah Todd is a rising American professional basketball player. He is currently playing for the NBA G League Ignite of the NBA G League. Todd has played in the league for just one season. Isaiah forged his college eligibility to pursue a professional career. He is part of the 2017 FIBA Americas Under-16 Championship Gold Medal winning team.

Isaiah Todd was born on October 17, 2001, in Baltimore, Maryland. He is among the three children born to Marlene Venable and her husband. A single mother raised Todd. Todd has two brothers named Douglas Carter and Chante Carter. He graduated from John Word of God Chrisitan Academy and then started his professional career. The player started his High School with John Marshall High School and transferred to Trinity and Word. Isaiah stands six feet and ten inches tall and weighs 95 kgs(210 lb).

Isaiah started playing basketball at the age of seven. He started his training with Derrick Wilson and then began playing on recreational teams and the Amateur Athletic Union (AAU) circuit. Todd was part of his High School basketball team and averaged 12.8 points and 6.5 rebounds per game, leading his team to district and regional titles in the freshman year.

As a sophomore, Todd averaged 18.6 points, 6.5 rebounds, and 1.8 blocks per game, shooting 39 percent from the three-point range. In the sophomore year, He helped his team win the Class 3 State Championship. At the end of the year, Isaiah was recognized as the Class 3 State Player of the Year and earned first-team All-Metro honors.

For the junior year, The player transferred to Trinity Academy with a scholarship. He was named USA Today All-USA North Carolina Player of the Year. Todd made into the  McDonald's All-American Game Team and the Jordan Brand Classic Team but could not play the game due to the COVID Pandemic.

Numerous universities approached Isaiah with scholarships, but he shortlisted all of them and decided to play for Michigan. To everyone's surprise, He de-committed from Michigan and announced that he would forgo his college eligibility to pursue a professional career in April 2020. The same month, Todd signed a one-year contract with NBA G League along with Jalen Green. 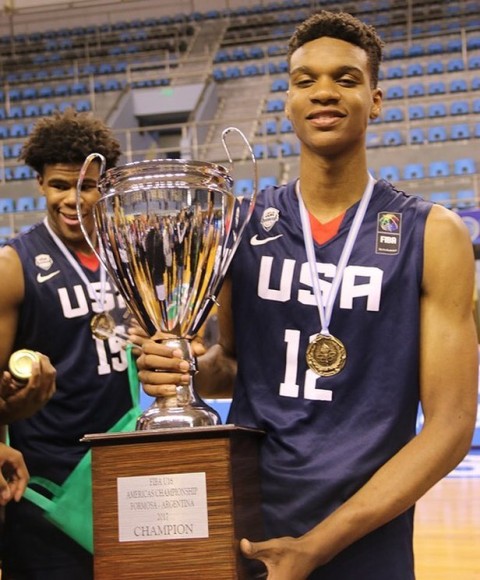 Todd has played for a season with the team and then averaged 12.3 points, 4.9 rebounds, and 1.5 blocks per game. In 2017, Isaiah represented the States at the 2017 FIBA Under-16 Americas Championship. He averaged 5.4 points and 5.2 rebounds per game in five games and won the gold medal.

Isaiah Todd is very much private about his personal life. He does not like to open much about his relationship status with the people. Todd is an active social media user and keeps posting photos and videos of his training and friends. Isaiah seems to be single as of early 2021.

Isaiah has an estimated net worth of more than $100,000. He signed a $250,000 contract with the NBA G league in 2020. Todd is very much early in his career and shall be earning millions in the days to come. He must be earning a handsome amount through his sponsorships, advertising deals, and several other secondary incomes.