Gossip Is the 28 Years American Basketballer Klay Thompson Married to Hannah Stocking; Details of His Girlfriends and Rumor Affairs

Is the 28 Years American Basketballer Klay Thompson Married to Hannah Stocking; Details of His Girlfriends and Rumor Affairs

Klay Thompson is an American professional basketball player, playing for the Golden State Warriors of NBA, who are the back to back NBA champions of 2017 and 2018. Thompson is a shooting guard of the team and is well renowned for his shooting abilities. He is a four-time NBA All-star and a two-time All-NBA Third Team honoree as well as a three-time NBA champion.

Thompson has got an eagle eye when it comes to putting the ball in the hoop but has he got the same eye for picking a suitable partner for himself? There has been a rumor spreading about Thompson getting married, is it true?

Fans of Thompson know that he was in a relationship with YouTube star and Instagram model Hannah Stocking. Many who have not been up to date about their relationship have been wondering if he married the model. To simply put the answer to rest, no, he did not marry Hannah.

Once a malaka, always a malaka  (tag a crazy person)

On the contrary, his relationship with Hannah came to an end. The two who had started dating somewhere in the year 2014 and were together for a long time. However, Hannah ended things with Thompson in 2015. The news came as a shock to the people but what was more surprising than the news of their break up was the reason for their break up. 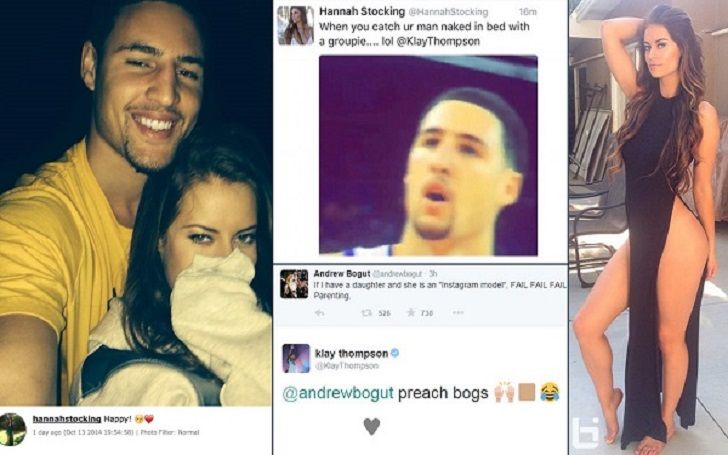 According to Hannah, Thompson had cheated on her with a groupie and she had caught him naked with the girl. She took it to Twitter to tell of Thompson's misdeed. There has not been any information regarding who the girl in question was and Hannah has also deleted the tweet that she made.

Also Read:  Brands That Have Endorsement deal With Klay Thompson; Does He Earn Huge Amount Like Other Basketball Players?

After his break up there has been a couple of more rumors regarding Thompson's love life. He was rumored to be dating another Instagram model Abigail Ratchford. However, Thompson has denied the claim stating that he is not involved with Abigail and that he is trying to find a wholesome lady out there.

There have been a few other rumors of Thompson's dating life. Another rumor about his dating life started to catch wildfire when Cherise Sandra, a cheerleader from Los Angeles Rams tagged herself in a photo outside of Thompson's house with the words “You & Me Baby.” His representatives have denied the rumors.

Oracle I missed you!! #myhappyplace

Currently, there are no updates regarding Thompson's love life. He has kept a relatively low profile regarding his love life. He has not been seen together with anyone new in recent times which suggests that Thompson could very well be single at the moment. So, for all the single ladies that are reading this, you may keep your hope alive to be his new girlfriend.