Gossip Is Rachel Glandorf McCoy getting Baby? Know about her Husband and Family

Is Rachel Glandorf McCoy getting Baby? Know about her Husband and Family

Rachel Glandorf McCoy is well known as a wife of Colt McCoy. Well, if you are wondering about the fairy tale love story, Rachel and Colt have given you the one. Additionally, after dating for several years the couple exchanged their marital vows in 2010. Besides, the couple is parents of 2 children, Sloane and Brooke.

Below here are the details about the husband of Rachel Glandorf McCoy. When did she got married? Is she expecting another baby? How and when did she meet her husband?

Rachel and Clot tied their knot on July 17, 2010. They encountered for the first time in the summer of 2008 when Rachel was an intern at KEYE TV in Austin and Colt was playing as a quarterback for Longhorns. Reportedly, Rachel got to know clot through the interviews.

Rachel Glandorf McCoy dancing with her husband in their SOURCE: Fabwags.com

In one of her interviews, she recalled her past memories saying:

“I interviewed him multiple times before we actually went out toward the end of the summer. Originally, I tried not to date him. I heard he was a good guy. But you never know.”

Her boyfriend Clot proposed her in on-screen at his college's football stadium and eventually engaged with each other in January 2010. Following the clot's proposal, the couple decided to exchange their marital vows on July 17, 2010. Talking about their wedding, their ceremony took place at Westover Hills Church of Christ in the presence of 550 guests in addition to their friends and family.

Moreover, some the famous sporting personality like Rick Perry, Major Applewhite, Roger Staubach, Jordan Shipley were the attendee of their wedding. Additionally, their wedding ceremony was celebrated with the performance of country singer Aaron Watson and former Longhorns wide receiver Jordan Shipley.

Who is Rachel Glandorf McCoy Husband? Let's find about him

Rachel is married to the famous American football quarterback, Colt McCoy. Clot currently plays for the Washington Redskins of the National Football League (NFL). Additionally, he was born on September 5, 1986, in Hobbs, New Mexico to Brad McCoy and Debra McCoy.

Moreover, Clot holds American citizenship and belongs to the white ethnic group. Prior to his Washington Redskins career, he played for the Cleveland Browns (2010–2012) and San Francisco 49ers (2013).

Reportedly, the couple is a parent of 2 children Sloane and Brooke. Additionally, first child a daughter name Sloane was born in 2015 and their eldest child Brooke Lincoln was born in 2016. 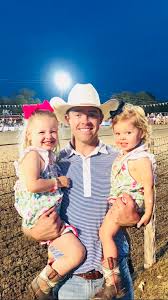