Hubert Hurkacz is a rising Polish Tennis Player. He has been playing professional tennis since 2015. Hubert has won two titles in his Singles career and one title in his Doubles. Hubert won the 2020 Paris Masters Double along with Felix Auger-Aliassime. Hurkacz is ranked no.1 in his National ranking.

Hubert Hukacz was born on February 11, 1997, in Wroclaw, Poland. He is among the two children born to Krzysztof Kuckacz and his wife, Zofia Maliszewska-Hurkacz. Hubert comes from athlete's family background. His mother was a junior tennis champion. His uncles are also tennis players. Talking about his physical appearance, Hubert stands six feet and five inches tall and weighs 81 kgs (179 lb).

Hubert Hurkacz has an estimated net worth of more than $2 Million. The Polish tennis player has earned much of his net worth through his successful short career in tennis. He is very much early in his career and shall be making much more in the future. 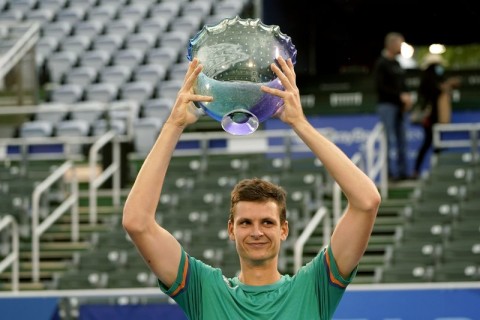 Many brands have not picked up Hurkacz. However, his primary sponsor is Yonex for his tennis equipment and apparel. In early 2021, He has already made more than $140,000 from seven wins and four losses in singles. Also, Hubert has earned $16,000 from his Doubles. Totaling his prize money from Singles and Doubles, he has made $2,758 709.

Mysterious Relationship Status of Hubert Hurkacz; Know About His Girlfriend

The Polish tennis player is an active social media user. He keeps updating his 40k fans on his Instagram about his training and traveling. Following his posts, We can be pretty sure that Hubert is single as of early 2021. He is living a happy life on his own.

Hurkacz is at the peak of his career and maybe the no.1 tennis player shortly. He remains busy training for his matches and spends most of his free time with his family or traveling to new destinations worldwide.

Hubert starting playing tennis with his mother from a very early age. He reached the 2015 Australian Open Doubles final in his amateur career. Although The player turned professional in 2015, He rose to fame only in 2018 when Hurkacz won the 2018 French Open defeating Tenny Sandgren. The same year, Hubert made his US Open debut but lost the Open First round game.

Although The Polish tennis player has not won much in major events, He has won three ATP Challenger Tour and two ITF Futures Tour titles in single. In Doubles, Hurkacz has won three ITF Futures Tours. In 2019, He won his first ATP Tour title in Winston-Salem Open. The same year, Hubert lost with Novak Djokovic at the French Open.

In 2020, Many events got halted due to the COVID pandemic. He played in some of the tournaments and had a good season. Hubert ended 2020 with No.29 in the world tennis ranking. In early 2021, He won the 2021 Delray Beach Open.