Gossip How Much Skyy Moore Net Worth? Details About Sources of Income

How Much Skyy Moore Net Worth? Details About Sources of Income

When a player gets drafted to the NFL, it's like a dream come true, and along with it comes the financial benefits. And recently selected to an NFL team, Skyy Moore achieved his goal of getting into the American football team! And as of 2022, Moore plays as the Wide Receiver in Kansas City Cheifs. And before joining the Cheifs, Skyy played in his college team, Western Michigan Broncos Football!

Aside from football, Moore also ventured into other forms of business practices. In 2022 alone, Skyy launched his brand, selling clothes and hosting events; it seems like the young athlete has a business plan he wants to fall back on if his career in the NFL comes to a halt. Kudos to the young and driven Moore for planning his future so early in his career!

Kansas City Cheifs promised Skyy Moore a whopping $6.45 million on his rookie class contract! How much is Moore's net worth?

Although the NFL teams offer veteran athletes hundreds of millions of dollars, as a rookie signing his first deal, $6.45 million isn't that bad. And Kansas City Cheifs promised the young Skyy Moore a $1.87 million signing bonus and $1.17 million salary cap for the 2022 NFL season, according to USA Today. 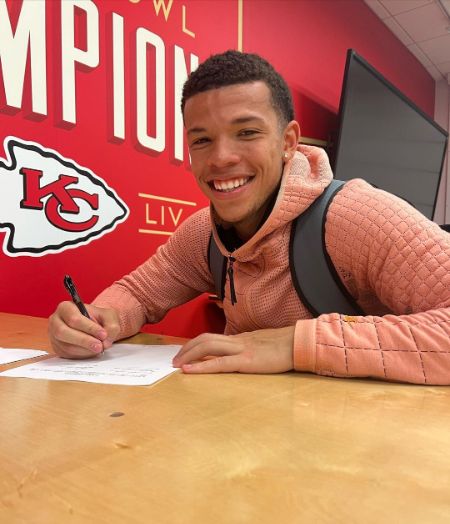 Despite the Cheifs laying out the prize in the open, the guaranteed money Skyy gets may differ a tiny bit. And as such, the up-and-coming NFL athlete may earn more than initially promised by the team or a bit less. Nevertheless, this is a massive deal for the former Western Michigan Broncos Football player. Aside from the millions he's earning, Skyy is gaining far more valuable than just cash, that being experience.

Skyy holds a decent amount of wealth at the moment. And currently, the Wide Receiver, Moore, owns an estimated $1 million. Since the talented athlete only started his professional football career, Skyy's net assets will inevitably grow along with his career in the coming years.

Skyy Moore draws an income from other ventures aside from football!

Skyy Moore, the rookie wide receiver for the Kansas City Chiefs, appears to be a hustler. Aside from his salary from the NFL team, he started branching into other business ventures. And Moore currently sells and endorses the brand Dying Breed. Likewise, it remains uncertain if Skyy owns the up-and-coming brand.

Likewise, the young athlete has already gained over 75.8k followers on Instagram. And so Moore promotes Dying Breed on his platform. Similarly, Skyy managed to collect over 4k subscribers on his YouTube channel. And on his Skyy Moore channel, his videos hold thousands of views.

Much about the young athlete remains to be discovered, but Skyy Moore is an avid social media user, Instagram, specifically. And over the years, Moore shared much about his assets without giving all the details. For example, the NFL star shared a picture sitting on the hood of his car! 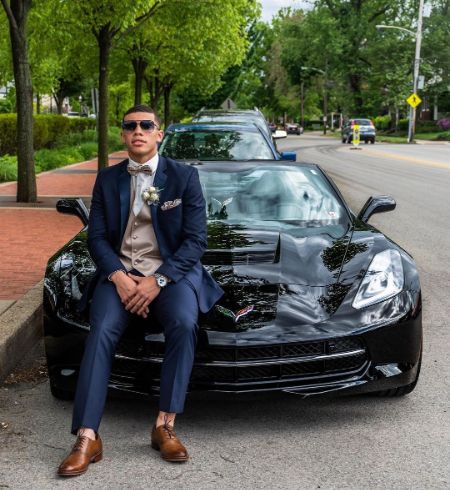 Skyy Moore was sitting on the hood of his car. SOURCE: [email protected]

Similarly, the NFL athlete owned the 2019 Chevrolet Corvette Grand Sport Convertible. Likewise, the base price of the car was $69,495. However, the high-end version of the car goes up to $92,605. The grand sport convertible boasts a 6.2-liter V8, 460 horsepower, 465 pound-feet, eight-speed paddle-shift automatic transmission. Likewise, the sports car can reach 0-60 MPH in 3.6 seconds.

Although Skyy doesn't hide from the public, he keeps his professional and personal life separate. And as such, the details about the NFL star's houses and real estate stays out of the public knowledge. Similarly, the Kansas City Chiefs athlete likes keeping the nosey life in the spotlight away from his family. Speaking of which:

How old is Skyy Moore?

As of 2022, Skyy Moore recently turned twenty-two. Likewise, Moore was born on September 10th, 2000. And Skyy holds the star sign of Virgo! And even in his early twenties, the talented American football player has a promising career and potential net worth! 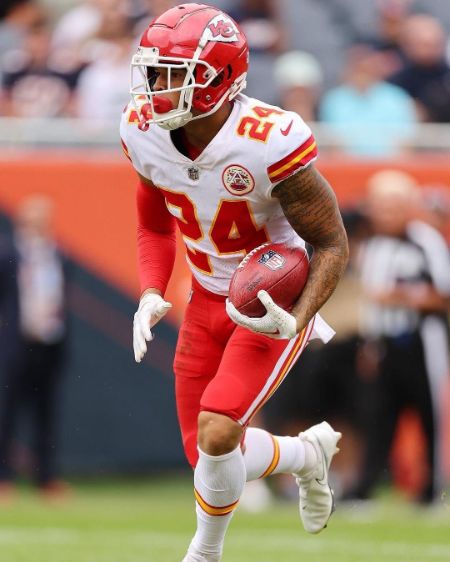 Skyy Moore was wearing the Kansas City Chiefs uniform and on the field. SOURCE: [email protected]

Although Moore enjoys his life as a famous athlete, much about the young NFL star stays hidden from the fans. And as such, Skyy keeps his lovelife hidden from the world. The only piece of his personal life available to the public is his full name, Schuyler M. Moore.