How much is Luke Wilkshire Net Worth? Know about his Salary and Career

The 36-year-old Australian professional footballer, Luke Wilkshire currently plays for the Sydney FC as a right back in the Australian A-League. In his 18 seasons in the football, Wilkshire has made 2 World Cup appearances alongside his notable career achievements and 25 club career goals. Wilkshire's  career, not only has blessed him with a huge fame but also with an attractive monetary benefit

Even though Luke Wilkshire has kept his property and earnings detail low, he is estimated to be enjoying the net worth of $8 million. Probably you are curious about his salary, so do scroll down for Wilkshire's contract, salary, net worth and his career achievements.

Net Worth and Salary of Luke Wilkshire

Luke Wilkshire, who has played 8 times for the Australian National Team has played for 7 clubs so far since his professional career debut in 2002 which includes Middlesbrough, Bristol City, Twente, Dynamo Moscow, Feyenoord, Terek Grozny and his current team Syndey FC.

Reportedly, Luke's net worth as of 2012 was reported to be $10 million, while his decreased market value (currently $61,000) and contracts have led the fall of his net worth to an estimated value of $8 million as of 2018.

Well, no other information of Luke Wilshire's' major endorsements or side business is out, so his contracts and career salary is regarded as the major base of his earnings.

Currently playing for the Sydney FC with a jersey number 26, on a free transfer from his former club Dynamo Moscow, Luke is reported to be enjoying the annual salary of $254,000.

Let's know about his previous contracts and salary.

While playing 3 seasons with Bristol City, Luke also made his appearance in the 2006 FIFA World Cup. Soon his solid performance in the World Cup granted him a 3-year deal from the Dutch top flight club FC Twente. Though the worth of the contract is not disclosed, his market value was reported to be $611,000.

After leaving his contract extension till 2012 with the FC Twente, Luke signed with Russian side Dynamo Moscow on August 26, 2008, for a reported transfer fee of $2.69 million, $60,000 less than that of his market value at that time which was $2.75 million. 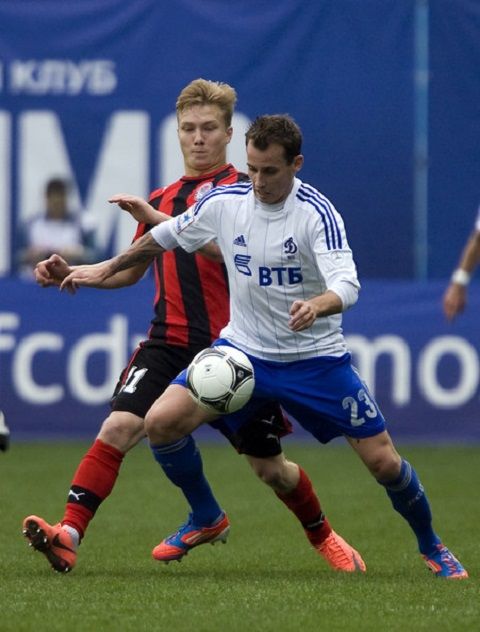 Even, though, the detail of the contract detail of Luke Wilkshire with the Moscow is not disclosed, Wilkshire's new contract earned him the annual salary of $5 million placing him 6th among Australian Sport's Highest Earners for 2012.

Later on July 31, 2014, Luke Wilkshire signed 1-year-deal with Feyenoord, which was followed by his consecutive 1-year contract with Terek Grozny and Dynamo Moscow in 2015 and 2016 while his market value was $1.22 million and $427,000 respectively. Sadly, the contract worth or salary is not disclosed.

And in 2017, Luke Wilkshire signed a 1- year contract with Sydney FC as an injury replacement player for Rhyan Grant. Though no news of his contract extension or retirement after the contract expiration is out, let's see what future has to offer.

As mentioned earlier, Luke Wilkshire, having played for the Australian National Football Team currently plays for the Sydney FC after completing his 16 seasons with 6 different clubs,  scoring the total career goals of 40 goals including 15 International goals.

Well, it's little surprise that the Australian footballer has not won any major awards despite his incredible games, though his career journey achievements cannot be unnoticed. Luke reportedly has made appearances in Premier League, League One, Eredivisie and Russain Premier League.

Besides this, Luke also played in the 2011 Asian Cup Finals. Though he was not named to play in the 2014 FIFA World Cup and also was left off the long list of 46 players for the 2015 AFC Asian Cup.

But all that matters is to win fans heart, which Wilkshire seems to have mastered.

Is Francesca Aiello Married to Blake Griffin? Know about their Relationship Status 4 weeks by Jack Ol