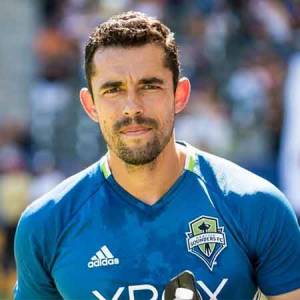 Herculez Gomez is a retired American soccer player who currently works for the ESPN channel as a commentator in both English and Spanish.

During his professional career as a footballer, he has played for MLS clubs like the LA Galaxy, Seattle Sounders and San Diego Sockers.

Herculez Gomez Hurtado was born on April 6, 1982, in Oxnard, California. He is the son of Manuel Gomez and has four other siblings besides himself. He is the oldest out of all the five children of his family. He attended the Las Vegas High School as he grew up around the area and played for the high school soccer team during his high school years.

The year 2001 was the start of Herculez Gomez's professional career as a soccer player. He was signed with the Mexico Primera Division on their second-division squad before being transferred to another second-division team Aguilas Blancas later in the year. He was noticed by the Los Angeles Galaxy during one of the friendly matches and later was acquired by the team in September of 2002.

In 2003, Gomez was loaned to Seattle Sounders of the United Soccer Leagues. During his time at the team, he suffered from a foot injury which caused him to stay away from the field for a long time. After completing his loan at the Seattle Sounders, he was once again loaned to San Diego Sockers.

For the 2005 season, Herculez Gomez returned to the Galaxy on a developmental contract. The outstanding performance helped him to be included in the first team of Galaxy. He got his opportunity to become a starter once Landon Donovan took a break for the team due to being called up to the national team. In the absence of Donovan, he was able to show his talent as a goal-scorer.

At the end of the 2005 season, Gomez had scored eighteen goals for the Galaxy. He was also the major factor for Galaxy to have won the 2005 Lamar Hunt U.S. Open Cup and the 2005 MLS Cup.

Gomez was traded to the Colorado Rapids along with Ugo Ihemelu in December of 2006, in exchange for Joe Cannon. Gomez played with the Colorado Rapids for 2007. In September of 2007, he suffered from a torn ACL which resulted in him having to undergo a lengthy recovery process, removing him from the play for quite a while.

For 2008, Gomez joined the Kansas City Wizards being traded by the team for 2009 MLS SuperDraft and a first round 2009 MLS Supplemental Draft pick. He played for one season with the Wizards before being released by the team in late 2009. Gomez went international when he joined the Mexican club Puebla F.C. in January 2010. He ended the 2010 Mexican season with 10 goals.

In the 2010 summer window, Herculez Gomez was moved to Pachuca. He along with the entire squad of Pachuca was placed on the transfer list. He and teammate Braulio Luna were moved to Estudiantes Tecos during the transfer window. Gomez played with the team for one year before being sold to Santos Laguna in December 2011 due to a tight budget.

Gomez was able to take Santos Laguna to 2012 Clausura Victory becoming the first player to have won both the MLS Cup and the Primera Division championship. He moved a few more clubs such as Xolos de Tijuana and Tigres UANL before joining Toronto FC. in August 2015.

Herculez Gomez was released from Toronto at the beginning of 2016 MLS season and was picked by the Seattle Sounder FC. The Seattle Sounders went on to win the 2016 MLS Cup making it Gomez's second MLS Cup victory. The following season, Gomez retired from the sport and instead became a part of ESPN as an Analyst.

Herculez Gomez is married. He married his longtime girlfriend Elsie Vargas in 2015. He has a daughter of his relationship with wife Elsie Vargas. His daughter who was born on 09/07/2017 is named Gianna Maria Gomez. He is still together with his wife and there has not been any information about his past love affairs.

Net Worth of Herculez Gomez for the year of 2018 is not known which is due to the lack of details in his financial earnings and personal assets. Back in 2015 when he was playing for the Seattle Sounders FC. he was reported to have made $261,000. His current earnings and salary as an ESPN analyst have not been disclosed.