Maguire played every match at the FIFA World Cup 2018 in Russia and helped the team reach the semifinals of the tournament. Married to Fern Hawkins, Maguire currently has the net worth of $10 million.

His parents raised him with his siblings, a sister, Daisy Maguire, and a brother, Laurence Maguire who is an English professional footballer. Moreover, he attended St Mary's Roman Catholic High School.

Harry Maguire began his career with the youth team of Sheffield United. Later he was promoted to a senior team and made his official debut for the team against Cardiff City in April 2011 where he was honored with the man of the match awards.

Further, Maguire left the club in 2014 after scoring 9 goals in 134 appearances. He then signed a three-year contract with Hull City with the transfer fee €3.16 million and scored his first goal against Bristol City in October 2016 in EFL Cup.

Maguire was loaned to Wigan Athletic on a one-year deal in February 2015. For the club, he gave his appearance in 16 matches and scored 1 goal.

Harry Maguire made his move to the Leicester City on June 15, 2017, signing to a five year deal with the transfer fee around € 13.70 million, potentially rising € 17 million with a bonus and he still plays for the club as a defender. 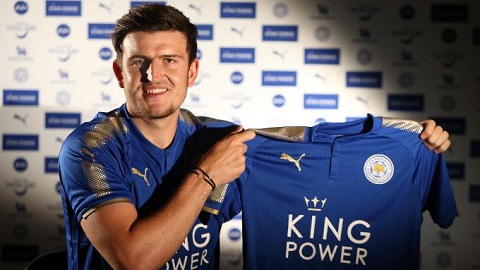 Besides, Maguire has been honored with numerous awards like PFA Team of the Year, Football League Young Player, Sheffield United Player of the Year, Hull City Players and much more.

Harry Maguire has represented his team in England 21 in 2012. Later, he was called up to England national team in 2017 and made his debut for the national team against Lithuania. He has won 3 caps for a national team.

He also debuted at the FIFA World Cup against Tunisia and also played every match in the tournament. He also scored a goal against Sweden that helped the team to reach the semifinals.

Harry Maguire engaged with, Fern Hawkins. The couple began their relationship since June 19, 2011. They have already been together for more than six years and are have a good time.

They have yet not decided about getting married but might soon hook up. The lovebirds were seen often enjoying their weekend at expensive destinations.

Net Worth and Salary of Harry Maguire