Arthur Gustavo Malzahn III, better known as Gus Malzahn is an American football coach who stands as the head coach at the University of Central Florida (UCF). Earlier, he served as the head football coach at Auburn University (2013-2020),  Arkansas State University (2012) after being the offensive coordinator at Auburn (2009 to 2011). While with the Auburn Tigers in 2010, he won the national championship with Gus receiving the  Broyles Award, which recognizes the top assistant coach in college football.

Irving, Texas native, Gus Malzahn was born on 28th October 1965, under the star sign Scorpio. The fifty-five years holds an American nationality and is of white ethnic background. Son of Edie Ruhman, he is a graduate of Fort Smith Christian High School. He was a walk-on receiver at Arkansas in 1984 and 1985 and then was transferred to Henderson State University where he was a two-year letterman (1988, 1989). In 1990, he received his bachelor's degree in physical education.

Gus Malzahn is currently under a five-year, $11.5 million agreement with UCF. Reportedly, he will earn an annual guaranteed compensation of $2.3 million, including $500,000 in base salary and $1.8 million for radio and television shows, speaking engagements, as well as product endorsements.

Moreover, the head coach is eligible for performance incentives up to $500,000 per annum for the football team’s academic and on-field success.

After firing Malazahn from Auburn in 2020, the college committed to buying out the remainder of his contract, for $21.45 million, which is the largest buy-out of a fired coach in the history of college football.

In March 2021, Gus and his wife Kristi Malzahn celebrated their 33rd wedding anniversary in their new house surrounded by new friends and new fans eager to embrace the couple as they embark on a new adventure. The couple tied the knot in 1988. 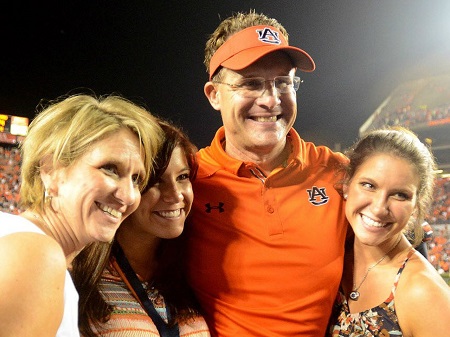 They are blessed with two daughters: Kylie and Kenzie. Kylie has two small children, which makes Malzahn's grandparents.

In 2019, he came out public sharing he was a new man and had been lifting weights on a regular basis.

In 1991, Malzahn started his coaching career serving as the defensive coordinator at Hughes High School. By 1992, he became the Hughes HS head coach, reaching the state championship game in 1994. Hughes lost the game to  Lonoke High School on an interception in the final minute.

In 1996, he became the head coach of the Shiloh Christian School. During his stint (1996-2000), he changed Shiloh Christian into one of the most powerful offensive prep teams in the nation.

In 2001, Malzahn joined Springdale High School. In 2006, he served as offensive coordinator and wide receiver coach at  Arkansas. He spent the next two seasons at Tulsa.

On December 13, 2011, Malzahn was hired as head football coach at Arkansas State University.