Gus Johnson is an American sportscaster currently serving for Fox Sports Wisconsin as play-by-play commentator. Earlier, he worked with CBS Sports as a play-by-play announcer for CBS' March Madness.

As of 2019. Gus Johnson has an estimated net worth around $0.5 million. Currently serving as a play-by-play commentator for Fox Sports his annual salary is assumed over $100,000. 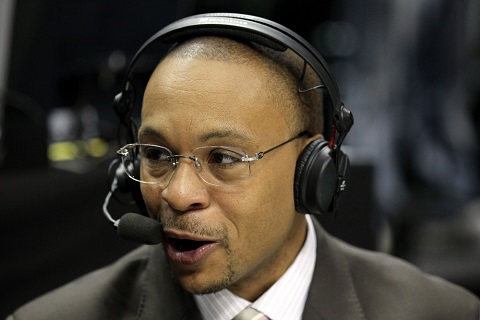 With a tremendous earning and net worth, Johnson is living a quality life.

Gus Johnson has not revealed any info about his private life and he is currently single in his status. He works in a brilliant way within soundboard and his quotes while delivering his presentation is absolutely awesome. He has not mentioned his wife and children.

Therefore, it is extremely tough to guess anything about his personal life. He is busy with his professional time and his career is everything for him. He is a good traveler and loves traveling in spare time. He is the man who is dedicated and devoted to social contributions.

Since 2001, he has been associated with several charitable organizations in the United States. He has never been part of any controversy. It seems like he is a single child of his parents. As of now, there is no info about his siblings.

Despite in the fifties, Gus Johnson has maintained a great physique. He has a great personality and has a perfect height of 5 feet and 10 inches. Several of his fans follow him on social networking sites.

Gus Johnson was born as Augustus Cornelius “Gus” Johnson, Jr. on August 10, 1967. He was born in Detroit, Michigan, United States and this his age is 51 years at this moment. He is an American by his nationality. His ethnicity is white.

He was born to Byron Johnson and Augustus Cornelius Johnson. His father was working in a private company as an engineer whereas his mother was a homemaker when he was born. Due to the regular fight and distrust, his parents later got divorced. His grandparents brought him up.

Gus Johnson is widely popular for his passion and excitement that he uses in the game. His popular signature phrases are “Oh my goodness!, “What a game!”, And the Runner…Bang!”, and much more. He spent the majority of his years as a play-by-play announcer with CBS Sports. He also worked for Madison Square Garden Network (MSG) from 1994 to 2010.