Gregory Rodrigues is a Brazilian professional MMA fighter who competes in the middleweight division. He has a fighting record of nine wins and three losses.

Rodrigues was born in Rio De Janeiro on February 17, 1992. Of his nine victories, four were via TKO/KO, the other four through submission, and one via majority decisions.

Rodrigues had his first pro match versus Bruno Lopes on September 6, 2014, at Jungle Fight 73. He lost the match via TKO after 1:05 of round 1. Rodrigues enjoyed his initial MMA victory defeating Douglas Carvalho Alves at Face to Face 9 on the undercard of Big Monster vs Gigantinho. On April 24, 2015, he faced his second pro loss against Renato Rangel at Face to Face 11 - Borrachinta vs Wagnao. 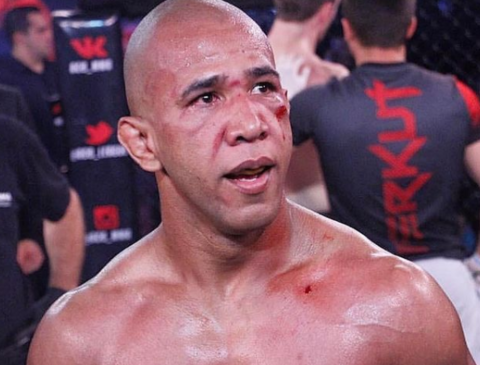 Gregory Rodrigues is set to make his UFC debut on June 5, 2021 SOURCE: Instagram

He got back to his winning streak besting Marco Aurelio Ligeiro at Face to Face 13 - Batista vs Teixeira on March 12, 2016. He forced Ligerio to tap out via heel hook at 0:54 in round 2. He took his win tally to three after defeating Robert Reed at Square Ring Promotions - Island Fights 39 on November 18, 2016.

One year later, he hammered Umar Gaisumov via TKO at ACB 73 - Silva vs Makoev. In the next three series of fights, he subsequently defeated Edilberto de Oliveira, Tanner Saraceno, and Brandon Hester. Rodrigues failed to secure the win in a match against Jordan Williams on September 15, 2020.

In his last two fights, he respectively defeated Al Matavao and Josh Fremd at LFA 102 - Souza vs Johns and LFA 108 - Fremd vs Rodrigues. Rodrigues will make his UFC debut on June 5, 2021, against Dusko Todorovic at UFC Vegas 28.

Details relating to Rodrigues's fight purses are yet to be disclosed yet considering the number of fights he has had, it should be reasonable to say the 29-year-old has amassed career earnings of more than $100,000 or so.

Taking his fame and career span into consideration, his base pay should easily be in the region of $10,000 - $20,000 per fight. It's worth noting that this figure gets doubled every time the fighters win the bout. 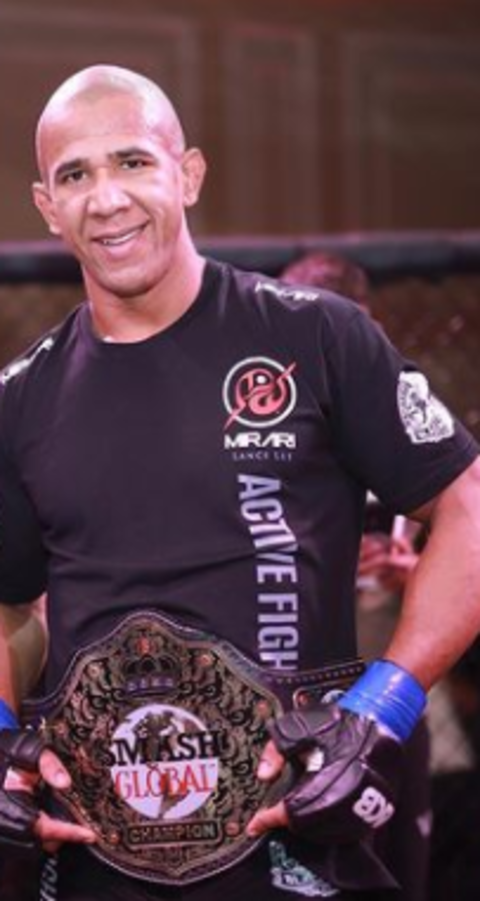 There's also the winning bonus, the fight of the night bonus, along with other stipends that more or less fuel the fortune of an octagon martial artist. With nine wins under his belt, Rodrigues might not be that far from the group of fighters who pull in six figures.

A title fight is something that brings you above average pay than a usual fight night and the Brazilian fighter's recent such match must have added a significant number to his net worth. Not to mention, his signing with the UFC is certain to facilitate him with more income avenues for the years to come.

The Robocop is married to Jessica Rodrigues. The couple tied the knot on March 25, 2017. Greg and Jessica reside in Los Angeles, California. Jessica is a native of Conselheiro, Lafaiete, a city in Minas Gerais, Brazil. She is often seen promoting her husband's fights through her socials. In fact, for the past several years, Rodrigues is all that has appeared on her Facebook account. 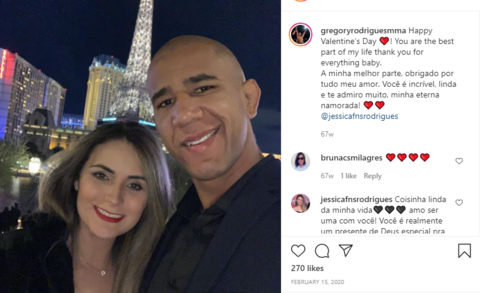 As for the new UFC debutant, he also happens to share the same sentiments for his wife - now and then barraging tbt moments of his and his better half on his Instagram account. It is believed Greg has known Jessica for more than eight years. She, however, started to appear alongside her future husband on September 13, 2014. On that very day, Greg announced Jessica as her girlfriend through his Instagram handle.