Greg Pateryn's Net Worth and Salary

Greg is married to his gorgeous girlfriend  Stefani Andrews on July 2, 2016, in a lavish wedding ceremony in front of family and friends. The couple is blessed with a child in 2018 but the details about the child aren't available.

Wouldn't want to spend my last day home any other way, see you tomorrow Montréal

In addition to this, Greg is living a happy married life with his wife/spouse since there aren't any rumors suggesting divorce or splitting. So far there isn't any information regarding the past relationship or affairs of Greg.

Gregory Stephen Pateryn was born on June 20, 1990, in Sterling Heights, Michigan, the United States but the details about his parents and family life aren't available. As per his nationality, he is American and belongs to the White ethnic group and his star sign is Gemini.

After completing high school, Gregory Stephen Pateryn enrolled at the University of Michigan and played for them.

Greg started his professional NHL career after being drafted in the 2008 NHL Entry Draft in the 128th overall pick by the Toronto Maple Leafs. Moreover, he also played for several other teams including Dallas Stars and Montreal Canadiens. 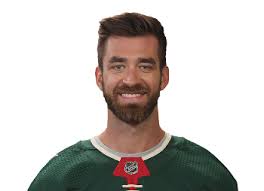 He was traded to Dallas by the Montreal in exchange for Jordie Benn on February 27, 2017. After that, he was left free agent and got signed by the Minnesota Wild on July 1, 2018. Currently, he is playing alongside defenceman Mathew Dumba.