Gil Brandt is a former American football executive who was awarded as 22nd member of the Cowboys Ring of Honor in 2018. He is also an NFL Media's Personnel guru offering insight and commentary on all aspects and commentary of teams and players.

Brandt was the vice president for Dallas Cowboys of player personnel in the NFL from 1968 to 1988. He is one of the main contributors to make American football grow as one of the most popular sports in America. He is also one of the pioneers of the modern NFL recruiting system. He used computers for scouting and evaluation of talents. Also, he implemented psychological tests to evaluate the mental status of players under pressure.

Brandt was born on March 4, 1932, in Milwaukee, Wisconsin, United States. He did not come from a privileged family and much information about his parents is still under the radar.

He attended North Division High School, a public school in  Milwaukee.  He played football in a defensive position during his time at North Division.

He also played college football at the University of Wisconsin-Madison but later dropped out of college just after 2 years.

Brandt's Net worth and Career Earnings

Gil Brandt has an estimated net worth of $20 million approximately. He accumulated most of his earnings from being involved as an expert and commentator towards teams and analysis. Gil Brandt taking a photograph in front of a helicopter SOURCE: [email protected]_brandt

The two-time Super Bowl Champion was also a former VP of Cowboys. Obviously, it has helped him to gather more amounts in his name. He is one of the richest active NFL contributors and has earned enormous sums of money during his period of 50 years.

Who is Cowboys Ring of Honor married to? (Wife and Children)

Gil Brandt is currently married to Sara for more than 3 decades. The couple got married on Feb 20, 1989. Gil never shies to appreciate his wife Sara in his Twitter account.

Sara helped put on a beautiful party last night. It was the second big event she planned this summer; our son got married last month. She's always sacrificed so much for our family. It's true: Beside every great man there is an even greater woman. 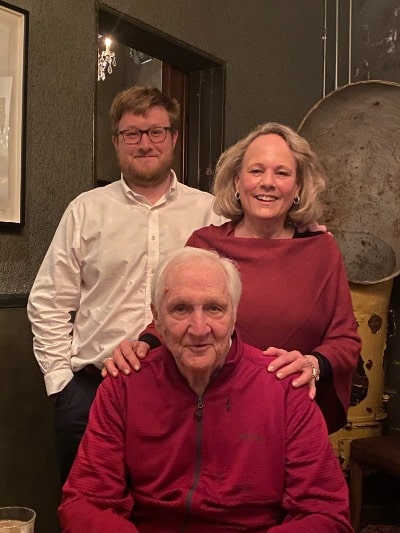 The Dallas Cowboys RoH is a proud parent of their son Hunter Brandt. He studies Business at Auburn and also played high school football.

In 2019, he and his wife avoided a possible tragedy just before receiving Cowboy's Hall of Fame. He was going to his tailor for adjusting the gold jacket he was going to wear for his special day.

They were shot by a bullet through the left windshield of their car. It nearly hit Sara, but thankfully, they both were safe.

On July 12, 2019, he posted his photo with two officers who provided assistance to him during that time.

Read about Howard Eskin and his Relationship

Gil went from working as a part-time scout to become the vice president of Dallas Cowboys. Eventually, he was announced with Cowboy's Ring of Honor in 2018. Let's explore his career in short.

In his early career, he also worked as a photographer. During his high school days, he used to play high school football. That helped him to find part-time work as a scout for the Los Angeles Rams. Later, he became a full-time scout at the San Francisco 49ers.

In 1960, the NFL expert joined Dallas as a chief scout under Tex Schramm. In his time at Dallas, he created new scouting techniques using computers. He also started finding talent outside America.

For his contributions to NFL, he was also awarded the Pro Football Hall of Fame in 2019.