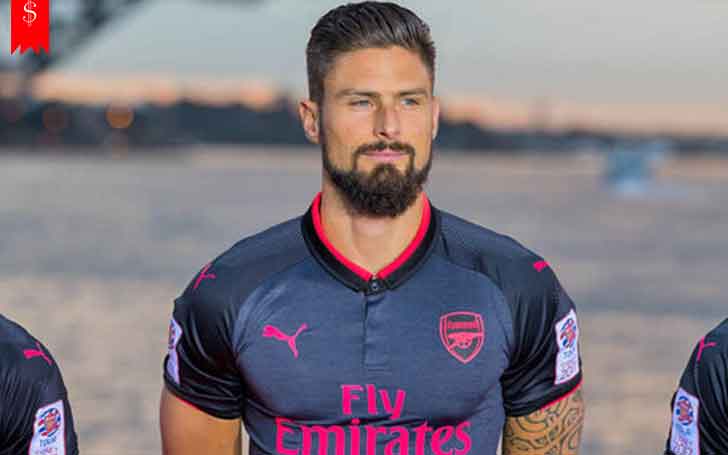 The winner of FIFA Puskas Award: 2017, Olivier Giroud currently plays as a forward for Premier League club Chelsea. 31-year-old Giroud also the squad member of France National Team in the 2018 FIFA World Cup has earned lots of fame and economic benefit with his professional career of 13 years.

Currently, Giroud blessed with lucrative endorsement deals and contract is estimated to be enjoying the net worth of $10 million. Alongside his career success, Giroud is also blessed with happy married life with his wife Jennifer Giroud.  Scroll down for the details.

Net Worth and Salary of Olivier Giroud

Olivier Giroud playing professionally since 2005 has made million dollars fortune with 6 clubs (
Grenoble, Istres, Tours, Montpellier, Arsenal, and Chelsea) for which he played in his career.

As of 2018, Olivier Giroud is estimated to be enjoying the net worth of $10 million, though, the actual net worth is under review.

On January 31, 2018, Giroud signed 1 and a half-year contract with Chelsea and made his move from Arsenal on a transfer fee of $23.83 million.

Chelsea Football Club has today completed the signing of Olivier Giroud from Arsenal.

As for a fact, the highest paid Chelsea's player Thibaut Courtois earns $9.64 million followed by Gary Cahill with the annual salary of $8.95 million.

Previous Contracts and Salary of Giroud

Making his professional debut with Grenoble in 2005, Olivier Giroud signed his first professional contract at the age of 21. While in the contract with Grenoble from 2005 to 2008, Giroud also played as a loan transfer from his club to Istres for the 2007-2008 season for an undisclosed fee.

Well, let's get the summary of his contract, transfer, and salary.

As reported, Olivier Giroud is sponsored by Puma since 2009. Also, back in September 2017, he signed an endorsement deal with Beardilizer and became its brand ambassador, while in 2014, he signed with Hugo Boss.

Also, Giroud has his sponsorship deal with Carlsberg.

Well, Giroud has not disclosed his house details, though he is reported to own a car collection which includes Audi, Rolls Royce, Citroen, Mercedes Benz and many more. 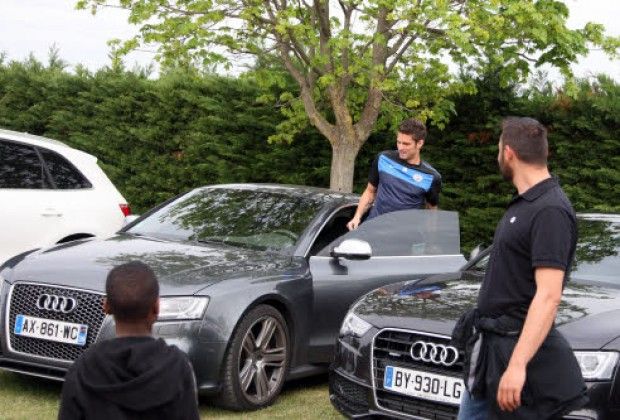 The worth of his car collection is assumed to be hundreds of thousands of dollars.

Giroud besides being a prominent footballer is also the loveable husband of Jennifer Giroud. Giroud married his longtime girlfriend Jennifer in 2011, however, along with the wedding details, the relationship beginning detail is also not disclosed.

CAPTION: Giroud and his wife Jennifer SOURCE: The Sun

Back in 2017, the couple reportedly were expecting their 3rd child, however, the news of the child's birth is not officialized yet. 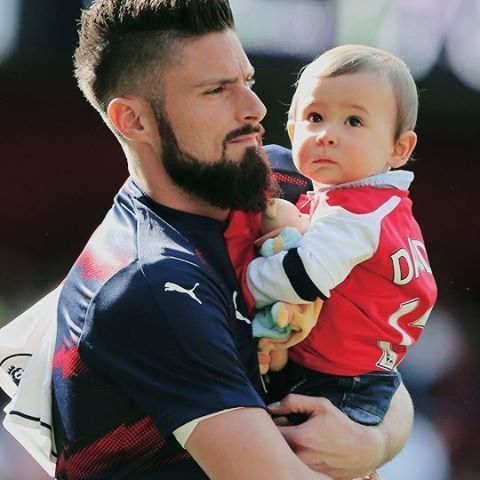 Probably, the detail of the family of  5 will be out soon.

But the happy family is not free from the dirty hands of controversy as in February 2014, Giroud was spotted cheating his wife. He was dating model Celia Kay.

For the incident, he apologized with his wife and everything was on the track after that.