Frank Gore is an American football running back who is third among National Football League (NFL) players in rushing yards at 16,000. Currently, he is a free agent. Earlier, he played for various NFL franchises such as the San Francisco 49ers, Indianapolis Colts, Miami Dolphins, Buffalo Bills, and New York Jets.

Miami, Florida native, Franklin Gore Sr. was born on 14th May 1983, under the star sign Taurus. The thirty-eight years old holds an American nationality and is of Afro-American ethnic background. He stands 5 ft 09 in (1.75 m) tall and weighs 212 lb (96 kg).

How Much Is Frank Gore's Net Worth In 2021? Contract & Salary Details

On 28th July 2005, Frank Gore signed a 3 year $1.542 million contract with San Francisco, which happens to be his career-first professional contract.

Reportedly, Frank Gore is currently living together with his girlfriend, Drick Parrish. Earlier, he was rumored to be linked romantically with Jasmine and Kehaulani.

Besides, he is a father to Frank Gore (Jr.), born in 2002 while the running was in college at the University of Miami. 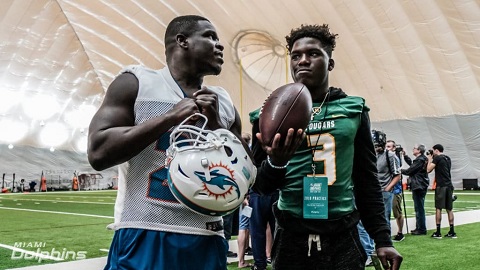 Gore Jr. followed in his father's footsteps and plays running back. Gore Jr., a three-star prospect, committed to play his collegiate football at the University of Southern Mississippi.

Gore enrolled at Coral Gables High School, where he was a running back on the football team. He recorded two notable record-breaking games against Miami Northwestern High School (then-career-high 293 yards and two touchdowns on 10 carries). He subsequently broke that record with 319 yards and six touchdowns on 13 carries against the third-ranked defense in the nation.

While developing as a talented football recruit, Gore also focused on improving his academics as well as assisting his mother, who was battling kidney disease with dialysis treatments. To remain close to family, he eventually chose to attend the University of Miami.

In September 2001, Gore made his collegiate debut against the Penn State Nittany Lions where he had six carries for 15 yards in the 33–7 victory over the Nittany Lions. As a true freshman, he has the third-best season total in school history by a freshman and was named Sporting News' Big East Freshman of the Year.

The following season, he suffered a torn anterior cruciate ligament (ACL) in his left knee.
In junior season, he returned from his injury. He concluded the season with 89 carries for 468 rushing yards and four rushing touchdowns to go along with 12 receptions for 105 receiving yards.

In the 2005 NFL Draft, Gore was picked in the third round with the 65th overall pick by the San Francisco 49ers, becoming the sixth running back to be selected that season.

On 28th July 2005, he signed a three-year contract with the team. In his NFL debut, he rushed for 17 yards on four carries and caught two passes for 21 yards a 28–25 victory over the St. Louis Rams. That season, he played in 14 games, starting one. After the 2005 season, he had major surgery on both shoulders.

Gore faced fumbling obstacles at the start of the 2006 season, losing the ball once in each of the first four games. Later, he improved his carrying and only fumbled three more times the rest of the year.

On 10th March 2015, Gore signed to the Indianapolis Colts agreeing on a three-year, $12 million contract.

In the 2016 season, Gore became the Colts first running back to rush for 1,000 yards since Joseph Addai in 2007 which led him up seven more places to eighth on the all-time career rushing list.

On 13th March 2019, Gore joined Buffalo Bills, signing a one-year, $2 million contract. At the start of the 2019 season, he rushed for 20 yards on twelve carries against the New York Jets.

On 6th May 2020, he signed a one-year deal with the New York Jets. That season he was the Jets leading rusher with 653 rushing yards and two touchdowns along with 16 catches for 89 receiving yards.