Florian Niederlechner is a German professional footballer signed to  Bundesliga club FC Augsburg as a forward. Previously, he had a stint with SC Freiburg, Mainz 05, 1. FC Heidenheim, SpVgg Unterhaching, FC Ismaning, and FC Falke Markt Schwaben. As a matter of fact, his football career is atypical because he became a Bundesliga player without passing through the youth ranks of a professional club.

A native of Ebersberg, Germany, Florian Niederlechner was born on 24th October 1990, under the star sign Scorpio. He holds a German nationality and is of white ethnic background. The thirty-one years old stands 1.87 m (6 ft 2 in) tall.

How Much Is Florian Niederlechner's Net Worth In 2022?

His current market value is reported, €3 million, last updated on 22nd December 2021. His highest market value to date is recorded €10 million back in 2020.

Florian Niederlechner's Wife? Is He Married?

Florian Niederlechner is a married man. His wifey goes by le_mel_g on Instagram.

They tied the knot in March 2019, after dating for a very long time. Later five months, they welcomed their first child, a son. 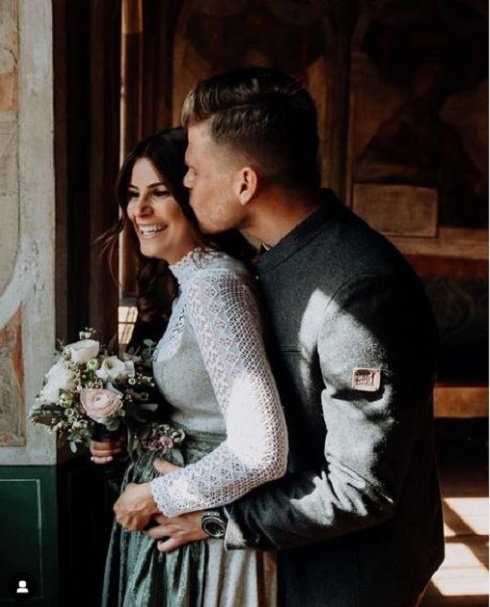 Mr. and Mrs. Niederlechner is quite concerned about their baby's privacy. Though they often share pictures with their baby on Instagram but has not yet revel face.

Florian began playing football with SV Hohenlinden. Later, he joined the youth set up of 1860 Munich, where he was forced to leave the under-13 team after a single year with the club being deemed too small and too slow at his 12. He then moved to loacl club TSV Ebersberg.

In 2008, Florian started playing senior football for Landesliga side FC Falke Markt Schwaben. By that time, he has already completed his vocational training as an industrial management assistant.

Eventually, he was offered by 3. Liga's SpVgg Unterhaching and joined the club. In the 2011-12 season, he scored eight goals and another eight in the first leg of the next campaign.

In 2012-13 winter break, he moved to 3. Liga side 1. FC Heidenheim. With the club, he earned a promotion to the 2. Bundesliga in 2014. Following his 15 goals and 10 assists in 33 league games and Heidenheim finishing 8th after promotion to 2. Bundesliga, Florian reached the Bundesliga, joining Mainz 05 in 2015 for a reported fee of  €2 million.

On 31st January 2016, he joined SC Freiburg on loan which was later made a permanent deal.