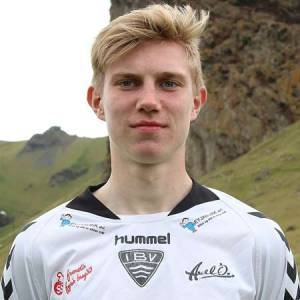 Currently 18, Felix Orn Fridriksson is a Professional Icelandic footballer, who plays as a midfielder for IBV. He is the product of IBV youth system.

Since 2018, he is playing for his national side, “Iceland national team”, as well as also has represented Iceland U19 team and U21 team.

A native of Iceland, Felix Orn Fridriksson was born on 16th March 1999, to Porey Svava and Fridrik Orn. His birth sign is Pisces. Talking about his nationality, Felix is Icelandic.

Felix grew up alongside his younger brother Alexander Orn. He began his football schooling with an Icelandic sports club Iprottabandalag Vestmannaeyta (IBV).

The significant source Felix’s income is his club contract and salary from the national team. As of 2018, he gets paid $35000 annually as his salary. His estimated net worth is recorded at $70,000. His current market value is $127,106.

Following various youth level at IBV, Felix made his professional team debut in the year 2016. So far he has played 32 games for his native club.

Felix has represented his national side in both senior and junior level, playing in various tournaments. He played in Iceland U17 national team from 2015-2016. Since 2017, he is representing Iceland U21 national team.

On 11th January 2018, he made is international team debut in an unofficial friendly against Indonesia being selected along with Mikael Anderson, Arnor Ingvi Traustason, and Albert Guomundsson.

So far, he has earned 2 caps for his national side.

As per record, Felix is possibly single and unmarried. As he is in his teenage, the 18-year-old midfielder might not be involved in a relationship or affairs. It seems that he is much focused on his football career rather than anything.

Adding up, in an interview, Felix said that “To get out to play and play as much nationality for Iceland”, as his goal as a footballer.