Also regarded as one of the best heavyweight fighters of all time, Fabricio was born on July 30, 1977, in Porto Alegre, Ro Grande do Sul, Brazil. He was born to Verlau Werdum and Celia Maria Werdum. He is Brazilian by his nationality and his ethnicity is multiracial. His star sign is Leo.

While he was in his teens, he got chocked by his girlfriend Larissa’s ex-boyfriend Marcos, who practiced Brazilian jiu-jitsu (BJJ). This encouraged him to learn BJJ so that he can teach that boy a good lesson but it changed into a lifetime opportunity for him.

He took the training from Marcio Corletta at his gym called Porto Alegre Academy, Winner Behring. Later, he moved to Spain with his mother where he carried on BJJ as his career. He has also worked as a bricklayer, operating forklifts, and building scenes for TV shows before gaining success in this career.

Werdum started his MMA career with Jungle Fight, Millennium Brawl in 2002, and later fight at Pride FC. He joined UFC in 2007 fighting against Andrei Arlovski. He then fought at Strikeforce and made his UFC return against Roy Nelson.

Fabricio then fought Mark Hunt and won the Interim Heavyweight Championship title. He later defeated Cain Velasquez to become the Heavyweight Champion. He lost the first title defense match against Stipe Miocic. He last fought against Alexander Volkov in March 2018 and is not active after he was found to have violated the doping rules.

Who is Fabricio Werdum Married to?

Fabricio Werdum is married to Brazilian beautiful girl named Karine Groff Werdum. The couple is tied with the marital knot since 2003. His spouse Karine Groff who is originally from Porto Alegre is the founder and photographer of onmyway.la and is also involved in Public Relations. 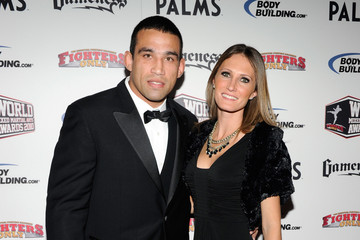 The couple is blessed with two beautiful children named Joanna Werdum and Julia Werdum. There are no rumors about his extra-marital affairs. The duo resides with their daughters currently in Los Angeles, California, United States.

Fabricio Salary and Net worth

Nicknamed as Vai Cavalo, Fabricio has an estimated net worth of $2 million in 2020. Having fought 16 bouts in the UFC, Werdum reportedly earned about $4 million. His highest paycheck was against Miocic for the title match at UFC 198 where he earned $540,000.

He has perfect height and body weight; he has a height of 6 feet and 4 inches. His bodyweight is 111.6 kg. He is active in social networking sites. People followed him on twitter. Moreover, info about his life & bio can be taken from wiki.