Ethan Pinnock is a professional footballer who is signed to the Premier League side Brentford as a center-back. Born in England, he represents Jamaica at the international level and has been capped two times.

Lambeth, England native, Ethan Pinnock was born on 29th May 1993, under the star sign Gemini. The twenty-eight years old holds a British nationality and is of African ethnic background.

How Much Is Ethan Pinnock's Net Worth In 2021? Salary, Market Value

It is unknown if Pinnock is married or not but the footballer is a proud father of his two sons: Yohan Pinnock and his brother. However, there is no information available regarding the boy's mother. 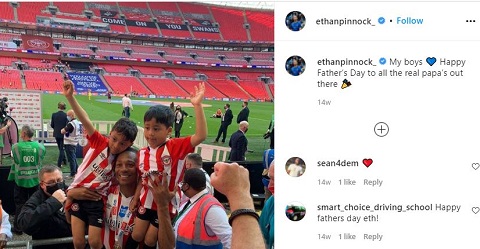 Pinnock often posts his sons on his IG.

Pinnock is of Jamaican descent on his father's side. There is no one in football in his family except his uncle, Nyron Nosworthy, a former English-born Jamaican footballer.

He enrolled at the Shirley High School, Reigate College, and earned a degree in physical education from the University of Greenwich.

Pinnock played in the Millwall academy between the ages of 9 and 15 and then joined  Isthmian League club Dulwich Hamlet (2008-2010).

In 2010, he was named to the Dulwich Hamlet's first team. In 2011, he was loaned out to Holmesdale, where he was deployed as a utility player.

On 21 June 2016, Pinnock joined Championship club Barnsley, signing a three-year deal.  Pinnock scored his first two goals for the club in league matches versus Reading and Sunderland on either side of the New Year.

He won the club's Player of the Year award and was named in the PFA and EFL League One Team of the Year selections. On 2 July 2019, Pinnock departed Oakwell, after making 67 appearances and scoring three goals for Barnsley.