Ethan Shea Horvath, aka Ethan Horvath, is a well-established American professional football player. He is currently playing in the EFL Championships side of Nottingham Forest. Horvath plays as a goalkeeper for his club and country and has represented United States' national U20, U23, and United States national teams.

Nottingham Forest's Number 1 made his senior debut with Molde in 2013; he later signed a four-and-a-half-year contract with the Club Brugge, where he made a total of 51 appearances. He signed with the EFL Championships side Nottingham Forest on 13th July 2021. 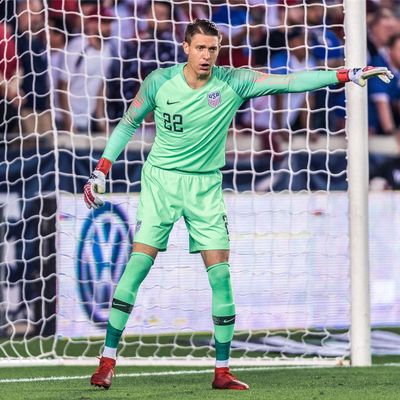 Ethan Horvath with the United States in 2021. SOURCE: https://www.ussoccer.com/

He was born to his father, Peter Horvath, who played college soccer with the Midwestern State Mustangs; Horvath's mother, Deana, supported him from his early years.

His weight is around 84 kg, and he has short blonde hair.

How much is Horvath's Net Worth? His Career Earnings and Salary

According to sources, Ethan Horvath's net worth is approximately over $1 million. Nottingham Forest's goalkeeper's major source of income is from his profession of playing football for different top clubs from 2013.

Ethan lives a moderate life with his family. United States's goalkeeper does not share much about his cars and houses with his fans; he loves visiting different places during his vacations. As per some sources, the yearly salary of Ethan Horvath is £988,000 per year. He earns £19,000 weekly with his current club and has earned well through endorsement deals and sponsorships. He is set to add up a million to his net worth in the coming years.

Ethan Horvath's Dating Life; Who is his Girlfriend?

The United States footballer is quite secretive about his personal life; he is also not found on Instagram and Facebook. As per some sources, he is single and fully focused on his professional career rather than dating women.

Horvath is single as of 2022 and is not seen with any women on social platforms. He loves professional life, but who knows, Ethan might be dating in secret and waiting for the right time to tell his fans.