Ethan Kwame Colm Raymond Ampadu simply is known as Ethan Ampadu is a British professional footballer who currently playing side for Chelsea and the Wales national team. A professional since 2016, he played for Exeter City (2016-2017), a team where he finished his youth career. At the international level, he made his senior debut for Wales in November 2017. Also, he played for England U-16 national team in 2015.

Exeter, England native, Ethan Ampadu was born on 14th September 2000, under the star sign Virgo. The nineteen years old holds a British nationality who came from a mixed ethnic background.

How Much is Ethan Ampadu's Net Worth In 2020? Know His Market Value & Salary

On 8th April 2020, his market value is updated €9 million and his highest-market value to date is recorded €10 million. 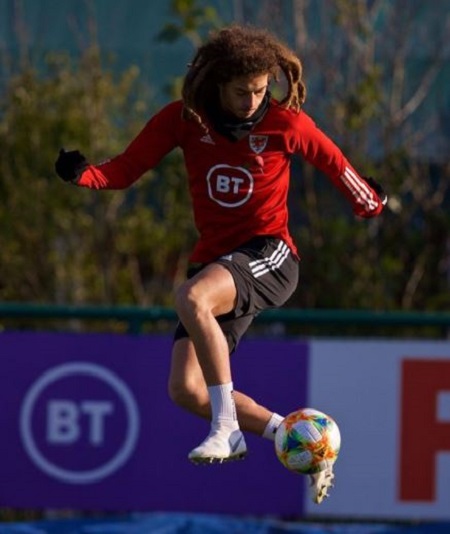 Besides, a Nike athlete his endorsement deal pays him a lucrative sum. Further, he earns a decent sum of money playing for the Wales national team, where he has been capped 13. As of 2020, his net worth is approximately $0.7 million.

Ethan Ampadu's Girlfriend: Is He Dating?

Ethan Ampadu, 19, has no official girlfriend disclosed in the public. Further, he did not feature any photos until it's of football on his Instagram where he has 345k followers. Possibly, he is more into his football career rather than being involved in a romantic relationship. For now, the Chelsea No. 44 Center-back / Defensive midfielder is single.

Ethan Ampadu was born to Kwame Ampadu, a retired former professional footballer who played for clubs Arsenal, Swansea City, Leyton Orient, and Exeter City. Currently, his father serves as a manager for the AS Monaco assistant manager.

His mother is Welsh which qualifies for the Wales national team. Further, he was previously also eligible to represent Ghana, England, and the Republic of Ireland.

A youth product of Exeter City, making an appearance for the under-18 squad since 2008, Etan made his senior debut for the club in an EFL Cup first-round match against Brentford at St James Park on 9 August 2016 at the age of 15 years 10 months and 26 days. Overall, he played 8 games for the senior team.

On 1st July 2017, Ethan signed to Premier League side Chelsea where he had entered negotiations over a compensation fee for the player in an attempt to reach a fee that both found acceptable for the then 16-year-old between the two clubs. On 20th September 2017, he made his debut for the Chelsea in an EFL Cup coming on in the 55th minute for Cesa Fabregas against Nottingham Forest. In September 2015, he penned a new five-year deal with Chelsea.