Eric Gordon is an American professional Basketball Player player who plays in the National Basketball Association (NBA). As of 2018, Eric currently plays for the Huston Rockets as their Shooting guard. Eric has played for other teams like Los Angeles Clippers, New Orleans Hornets / Pelicans.

As a Shooting guard, Eric reportedly earns around $13,500,375 as his yearly salary from Huston Rockets. Further, Eric has an estimated net worth of over $68 million.

Eric Gordon was born on December 25, 1988, in Indianapolis, Indiana to parents Eric Gordon Sr. and Denise Gordon. As per his nationality, he is American and belongs to Black ethnic group. Further, his star sign is Capricorn. He grew up along with his siblings, Evan Gordon, and Eron Gordon.

Eric, in his high school career, held an average of 29 points and 6.2 rebounds. After completing high school, Eric enrolled at Indiana and played for the Indiana University Bloomington.

Eric Gordon Net Worth And Salary

Other than being a famous NBA Shooting guard, Eric is pretty famous in social media, having 2014 followers in twitter and 293k follower in Instagram.

Eric was associated with the Los Angeles Clippers from the year 2008 to 2011. He was drafted by the Los Angeles Clippers with the seventh pick in the 2008 NBA draft. For his outstanding stats, he was unanimously selected to the NBA All-Rookie Second Team, averaging 16.1 points, 2.6 rebounds, 2.8 assist, 1.0 steals. Later, he finished fifth in Rookie of the Year Voting. 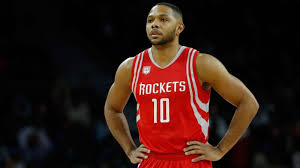 In his ten years of playing career, he played for different teams.

He played for New Orleans Hornets/Pelicans from the year 2011 to 2016. Later he made a contract with Huston Rockets in 2016 and currently playing for the team till date.

Some of the stats of his playing career are enlisted below:

29 years old NBA star seems to be focused on his basketball careers and currently, there are no any rumors about his probable girlfriend or wife.