Eric Ayala is a rising Puerto Rican college basketball player. He has been playing in the Big Ten Conference for the Maryland Terrapins. Eric plays as a Point Guard/Shooting Guard for his team. Ayala represented Puertico in the 2015 FIBA Americas U-16 Championship.

Eric Ayala was born on January 2, 1999, in Puerto Rico. He is the son of Brandy Truitt and her husband. Much about his parent is still under the radar. After graduating from High School, Ayala enrolled at the University of Maryland and is majoring in family science. Talking about his physical appearance, Eric stands six feet and five inches tall and weighs 93 kg.

Eric was part of the basketball team for High School and a consensus four-star recruit. After graduating from High School, he played in the AAU with Team WeR1 and averaged 14.2 PPG and 6.3 rebounds/game with WeR1. The player helped the team to consecutive titles. Ayala committed to play for Maryland, dropping the offers from Oregon, Syracuse, Miami and Arizona. 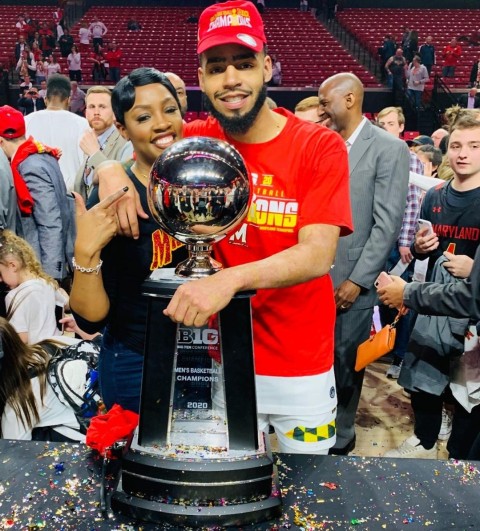 Going into the junior year, The player became his team's primary point guard. Eric finished the season averaging 15.1 points, 4.3 rebounds and 2.2 assists per game. Ayala earned his first All-Big Ten Honorable Mention. Shortly after the season, He listed his name for the 2021 NBA draft with college eligibility for the next season. Like Eric Williams from the University of Oregon, Eric also withdrew his name from the draft list.

Ayala had also got a chance to represent his home country in an international event of the 2015 FIBA Americas Under-16 Championship. In the events, He averaged 19.6 points, 6.8 rebounds and 2.8 assists per game but could not lead his team to any medals.

Eric Ayala has an estimated net worth of more than $50,000. Although he has yet to start his professional career, he has already launched his merchandise and partnered with Campus Mogul for the kits. Eric will be making millions in the future.

Who is Eric Ayala dating? Know About His Relationship Status and Girlfriend

Eric is an active social media user but is very much private about his love life. He has not uttered a single word about his relationships in public. There is no rumor of him dating anyone or being spotted with anyone suspicious in public. Ayala is very close to his mother and spends his free time with his family, friends and mother. Eric is very early in his career and must focus on his career rather than spending time with people.