Enes Unal was born on May 10, 1997, in Osmangazi, Bursa. He is among the two children born to Mesut Unal and his wife. His father a former Turkish footballer who played as a center-back, best known for his Süper Lig stints with Bursaspor and Sakaryaspor. Enes has a brother named Hasan Basri Unal. Unal stands six feet and one inch tall and weighs 72 kg.

Enes started training football along with his father from the Bursaspor youth team in 2006. He made his professional debut with Bursaspor against FK Vojvodina in the first leg of the third qualifying round of the 2013–14 UEFA Europa League. In August 2013, Enes became the youngest player to score in the Süper Lig.

Unal appeared in thirty-five games in the next two seasons with four goals. In July 2015, Enes signed with English Premier League club Manchester City for a reported fee of £2 million, their first summer purchase. However, He was announced to go on a loan to the Belgian Pro League for two seasons, but the agreement got canceled. In the next two seasons, Enes moved to two other leagues under a loan.

In 2017, Enes joined the La Liga club Villareal for £12 million with a buy-back option for Manchester City. In the next two seasons, Unal played with numerous La Liga clubs, and in August 020,  Getafe announced the signing of Ünal from Villarreal on a five-year contract.

In 2012, Unal made his international debut with Turkey U16. He finished his U16 career with twenty-four goals in twenty-five games. Enes called for the senior team in 2015. Since then, He has played in twenty-two games and scored two goals.

Enes is a married man living a happy married life along with his wife. Unal married his longtime girlfriend, Lisa Smellers, in December 2019. They had been dating for several years before tying their wedding knot. Enes is a Belgian football player who plays for the KRC Genk Ladies. In November 2020, Unal opened about expecting a baby shortly along with his wife. 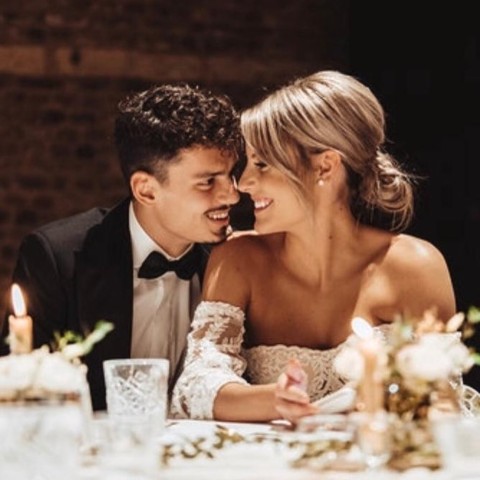 Enes along with his wife, Lisa, at their wedding SOURCE: [email protected]

Enes and Lisa welcomed their first child, Lisa Ela. Unfortunately, he has not shared much about his daughter in public.

Enes Unal has an estimated net worth of more than $10 Million. He has been making a handsome amount through his successful career as a football player. In 2020, Unal signed a  five-year contract and won close to seven million euros with the bonuses during his contract at his new club.

Ünal joined La Liga side Villarreal for £12 million in 2017. In 2015, He signed with Manchester City for £2 million. He is very much personal about his earnings and salary with the public.