Apart from competing for UFC, he has also previously held the Jungle Fight Welterweight championship. He is scheduled to fight Alexey Kunchenko at UFC Fight Night 170 on March 15, 2020.

Looking at his professional MMA career and his several wins and bonus award that he has accumulated throughout his UFC fighting career, his net worth is estimated to be around $350,000.

Elizeu Zaleski dos Santos is currently married to his spouse, Tatiane. The couple started dating each other in 2010 and has been together for almost a decade. The couple probably got married in 2018 after the birth of their child. 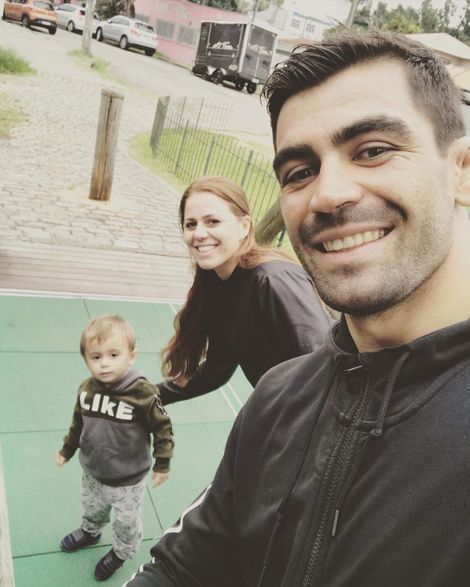 His then-girlfriend gave him the news of her pregnancy after his win over Max Griffin in October 2017. After the win, Elizeu announced that he would marry his girlfriend. He said:

“I think we’re going to have to get married now. There’s no escaping it anymore. So this bonus would certainly help a lot with the wedding.”

Looking at their photos posted on Zaleski social sites such as Instagram and Facebook, it seems that the couple is enjoying and enjoying their life together.

Currently 31, he stands at a height of 5 feet 11 inches tall and weighs around 77 kg. He has a reach of 73 inches which he uses to his optimum during his fights.

Elizeu Zaleski dos Santos is of Brazilain nationality. He was born on November 12, 1986, in Francisco Beltrao, Parana, Brazil. Initially, he trained an Afro Brazilian martial arts, Capoeira at 9 and later switched his profession to MMA at the age of 20.

His parents divorced when he was very young and he started living with his mother in a big city. After four years, he moved to his father Irineu dos Santos on his farm.

He started his professional MMA career in 2009 and competed for various Brazilian MMA promotion such as Smash, Amazon Fight, and Jungle Fight. Zaleski later moved to the United States of America and joined the American famous MMA organization, Ultimate Fighting Championship in 2015.

He made his main debut for  UFC against Nicolas Dalby on May 30, 2015, and lost via split decisions.

The Brazilian MMA fighter later took on Omari Akhmedov and won his maiden UFC bout with a knockout in the third round of the match. The fight also gave him the Fight of Night bonus and later faced off against Max Griffin on October 28, 2017, and won the bout through a unanimous decision and later went to win the Fight of the night bonus award.