Elisa Johnson is an Instagram sensation whose personal style has earned her over 405k followers. Besides that, she is widely recognized as the adopted daughter of Hall of Fame Los Angeles Lakers point guard Magic Johnson. She is the owner of the fashion line Elisa Johnson.

California, United States native Elisa Johnson was born on 21st December 1994, under the star sign Sagittarius. Regarding her nationality, she is an American who belongs to the Afro-American ethnic background.

How Much Is Elisa Johnson's Net Worth?

Raised into a wealthy family, Elisa Johnson has had a lavish lifestyle since birth. Her father, Magic Johnson, has a jaw-dropping net worth of $650 million as of 2022. 5X NBA champion Magic Johnson summoned over $100 million from his 2010 sales of 105 Starbucks franchises and his 4.5% stake in the Los Angeles Lakers.

Moreover, her father, Magic, is associated with sports by his ownership stakes in the Los Angeles Dodgers and the WNBA's Los Angeles Sparks. Johnson's business empire includes insurance, healthcare, food services, and staffing. 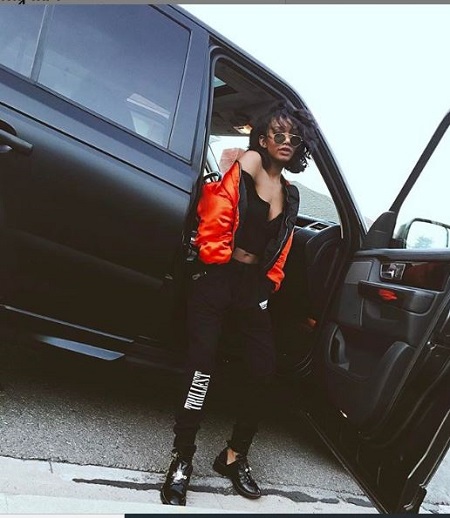 Currently, she lives in tony, gated Beverly Park with Johnson's family. The family has a private jet which they keep in Van Nuys. A graduate of the Fashion Institute of Technology (FIT), Elisa Johnson hopes to launch her sunglass line.

Elisa Johnson's Boyfriend: Is She Dating?

Elise Johnson is currently in a relationship with Dominique Hollington and a model signed to Wilhelmina's modeling agency. Recently, she uploaded a sweet photo of both of them, wishing him a happy birthday. 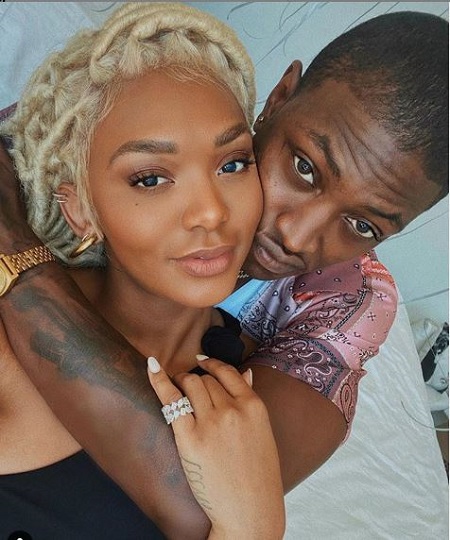 In the post, she reveals that the duo had been quarantining together, adding that it had been a memorable time, "but we made it out." Scrolling through their socials, the pair seems to have started dating in 2019.

Aforementioned, Elisa Johnson was adopted by veteran NBA star Magic Johnson and his wife Cookie Johnson when she was three days old. Reportedly, Elisa met her biological mother when she was eighteen years old.

Furthermore, she has two elder brothers: Andre, a marketer from his father's affair with Melissa Mitchell and Earvin Johnson, a TV personality and socialite who came out as gay to his family at 17 and publicly in 2013. 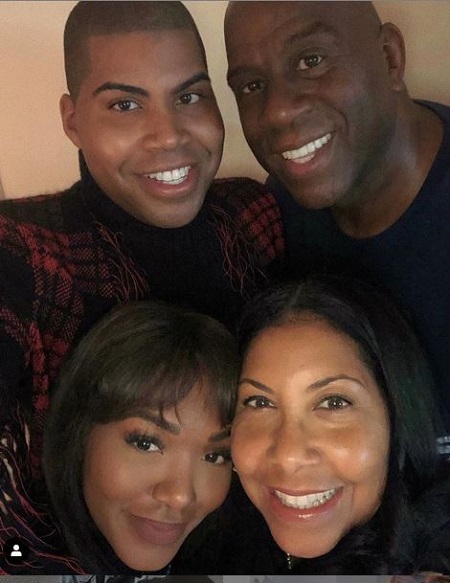 Elisa with her father, mother, and brother SOURCE: Instagram @elisajohnson

Until high school, Elisa played basketball and football and desired to be a future WNBA player but did not pursue a place in the WNBA. Later, she enrolled at the Fashion Institute of Technology (FIT) In NYC, majoring in Fashion Merchandising Management.

Moreover, she joined her mother with the Ladylike Foundation, which aims to educate and build self-esteem among young women from underprivileged communities. Additionally, she remains active in working with adopted and foster children. On the other hand, her father, Magic Johnson, who was diagnosed with HIV in 1991, has become an outspoken advocate for HIV-positive individuals, encouraging education and serving to reduce the stigma surrounding the virus.

Elisa Johnson is twenty-seven years old. She stands five feet four inches tall and weighs 55 Kg. Her body measures 35-26-35 inches. Her shoe size is 7. She has a pair of beautiful black eyes, and her natural hair color is brown.

Magic Johnson is regarded as one of the best/greatest point guards. He started his NBA Career in 1979 and played until 1991. He did make a return in 1996 and then played with the Magic M7 Boras for the 1999/2000 season. Magic is among the players with the highest NBA championship title. Johnson was named NBA Finals MVP thrice in 1980, 1982 and 1987. The Lakers drafted him as the first-round overall 1st pick. He is the only player to average 12 assists in an NBA Finals series, achieving it six times.

Magic had a glorious High School career and received numerous offers from top universities. He committed to play for the University of Michigan. After playing for his sophomore year, Johnson forwent his junior year and was listed for the 1979 NBA draft, and the Lakers picked him up.

Magic represented the United States in numerous international events. He helped the United States Men's Basketball Team win the 1992 Olympic Gold Medal at the Barcelone along with Michael Jordan. The same year, Johnson was part of the Gold Medal-winning team at the FIBA Americas Championship.

Magic Johnson As a Coach

Magic joined the Lakers in 1994 as their head coach. He had a good start to his career but ended the season with the ten-straight loss. Johnson announced his retirement shortly. Combining his playing career and sports ownership career, Johnson has 10 NBA championships, five each as a player and later as a minority owner of the Lakers.