Edimilson Fernandes is a professional footballer from Switzerland playing for the Bundesliga side Arminia Bielefeld on loan from Mainz 05 as an attacking midfielder. A full international since 2016, he has been capped 14 times with a goal from Switzerland national team.

Sion, Switzerland native, Edimilson Fernandes was born on 15th April 1996, under the star sign Aries. The twenty-five years old holds a Swiss nationality and is of Afro ethnic background. He stands 1.90 m (6 ft 3 in) tall.

How Much Is Edimilson Fernandes Net Worth In 2021?

As of 2021, Fernandes' net worth is approximately $5 million. The footballer is living a lavish lifestyle. His favorite brands are Christian Louboutin and Nike for shoes, plus Philipp Plein and Kenzo for clothes. He drives BMW.

Edimilson Fernandes is a tough guy and he ain't going to reveal his love life any time soon. He said, ‘I have several girlfriends. Nobody told me I had to be serious. I have a couple of official girlfriends, and a couple that is not so official." But that's a long time ago. 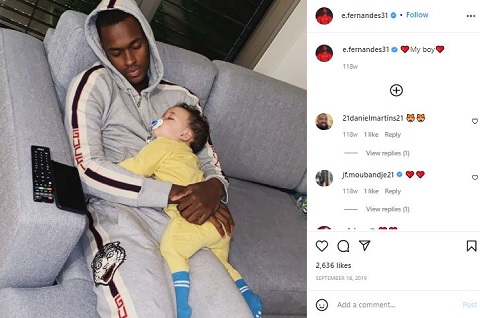 Scrolling through his IG, he often shares pictures holding a cute little baby. The caption reads "My Boy." Is Fernandes already a baby daddy? Well, this is another puzzle to solve.

On 25th August 2016, he joined West Ham United, agreeing on a four-year deal. On 25th September 2016, he made his debut for the club in a 3–0 home defeat by Southampton, as an 82nd-minute substitute for Mark Noble.

His first goal for West Ham United came on 26th October 2016  in a 2–1 win against Chelsea in the EFL Cup. On 13th August 2018, Fernandes was loaned out to Fiorentina on a season-long loan deal along with an option to buy.

On 3rd June 2019, Fernandes signed to the Bundesliga side Mainz 05, signing on a four-year deal for an undisclosed fee. On 17th August 2019, he made his debut for the Mainz 05 against SC Freiburg.

He represented his national side at the 2020 UEFA European Championship, where the Swiss team was an excellent team reaching the quarter-finals.