Ederzito Antonio Macedo Lopes or simply known as Eder is a professional footballer who plays as a forward for Portugal national football team and for  Russian football club, Lokomotiv Moscow on a loan from French football club LOSC Lille.

Apart from playing for several European football clubs, he has been representing Portugal national side since 2012 and scored a decisive goal in final to hand Portugal  UEFA Euro 2016 title.

He was also given the title of Merit of order for his outstanding contribution to Portuguese football.

Eder of African descent was born to Filomeno Antonio Lopes on Bissau, Guinea-Bissau on 22 December 1987.

His family migrated to Portugal when he was very small and began to play in the youth academy of Portuguese local side, ADC Ademia in 1999.

Eder’s Net worth and Salary

Eder earns an annual salary of $3. 2 million with weekly salary being around $63317 which he receives from playing in the Russian club, Lokomotiv Moscow. His current market value as of 2018 is around $ 5 million.

His total net worth combined with his income from playing for several clubs along with his endorsement deals and assets is estimated to be above $4 million. His endorsement deal includes with famous sportswear brand Nike and wears the shoes designed by the company.

Eder is having a good time with his life and seems to enjoy living a lavish lifestyle.

Eder began his senior career with Portuguese football clubs,  FC Oliveira does Hospital and GD Tourizense and joined Academica. He made his debut for Primeira Liga side against Estrela da Amadora on 24 August 2008.

He scored his first goal for the team against Associate o Naval 1º de Maio towards the latter part of the season.

The Portuguese striker was then transferred to Portuguese football club, SC Braga whom he signed a four contract deal in 2012. He made his debut for Braga against Pacos de Ferreira on 2 September 2012 and scored his maiden goal for the team against Rio Ave in September.

Eder then went to sign a three-year contract with English Premier League club, Swansea  City on 28 June 2015 for a reported transfer fee of $ 6.94 million.

He made his premier league debut against Chelsea FC  on 8 August 2015. During his time at Swansea City, he was transferred to French Ligue 1 club, Lille OSC as part of a loan deal in 2016 and made his debut for the French club against  Stade Malherbe Caen on 3 February 2016.

Eder scored his first goal for Lille against Stade Rennais on 7 February 2016.

After being permanent for Lille OSC, he was transferred to Russian football club, Lokomotiv Moscow for a season on 23 August 2017.

Eder made his international debut for Portugal team against Azerbaijan on 11 September 2012 during 2014 FIFA World Cup Qualifiers.

He scored his first international goal for Portugal against Italy in a friendly match on 16 June 2015 and has since represented Portugal in FIFA 2014 FIFA World and UEFA Euro 2016.

He also played alongside players such as Nani, Pepe and Anthony Lopes for Portugal captained by Ronaldo in the major tournament organized by FIFA like World Cup and Euro Cup.

Eder scored the deciding and only a lone goal in the final against host France for Portugal that proved to be crucial as the goal helped Portugal to win the UEFA Euro Cup 2016 for the first time in its history.

Eder’s father, Filomeno Antonio Lopes was arrested for murdering his girlfriend Domingas Olivais in 2003 and is currently serving a life sentence imprisonment in the UK. His father is also a wanted man in Portugal for armed robberies. 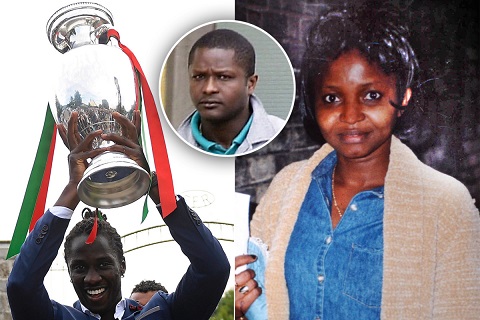 [ CAPTION: Eder father being jailed for murder ][ SOURCE: The Sun ]

Eder married his sweetheart, Sanne Lopes in July 2017. Eder appeared in a white suit while Sanne was seen on the white gown on their wedding. The ceremony was held in Algarve, Portugal and was planned by Noelia and Sonho a Dois.

The couple is enjoying a blissful marital life and loves each other very dearly.

Sanne is a Russian with Master's degree in Criminal Justice.