Drew William Wolitarsky, aka Drew Wolitarsky, is a popular professional Canadian football player playing as a wide receiver in the Canadian Football League team Winnipeg Blue Bomber. Wolitarsky is also a musician and just released his first album on 29 Jan 2021.

Drew Wolitarsky, the Wiinnepeg wide receiver, is also a two-time Grey Champion after winning with the Blue Bombers in 2019 and 2021. Drew was drafted by the Winnipeg Blue Bombers in the supplemental round of the 2017 CFL Draft.

On 22 March 1995, Drew Winnipeg's receiver was born in the northwestern Los Angles: Santa Clarita, California. His zodiac sign is Aries and talking about his age Drew is just 27 years old. The athlete has active roster status. Drew, the Winnepeg wider receiver, put on no. 82 for his team. Drew currently resides in Canada with his family. He switched to the CFL side in 2017.

Drew William Wolitarsky, professionally known as Drew Wolitarsky, is a diverse racial individual with a good height of 6 feet 2 inches. He is a strong white man who weighs over 101 kg or 223 lb. Further info, the 2x Grey Champion Drew always maintains his physique well and regular exercise to maintain his athletic body. He has a well-built muscular body structure. Drew has a white complexion with blonde hair and brown eyes.

The California-born footballer is born to a Canadian mother and an American father. He is the son of his beloved mother, John Wolitarsky and mother, Audrey Wolitarsky. Audrey and John came in touch in Montreal, and after dating for some time, they tied the permanent marital knot. John being an American, resides in Montreal with his wife. Along with Drew, he has a sibling brother Austin Wolitarksy. The 6 ft 2 inches and 101 kg receiver is Canadian and American nationality.

He is a footballer with dual citizenship. Because of his Canadian mother, he got a Canadian citizenship card early and made his appearance in the 2017 Canadian Football League after he went undrafted in the 2017 NFL Draft. The CFL star player is very close to his parents and loves going on outings with them in his leisure time.

His parents were aware of his interests and passion for football; thus, they always motivated and supported his football journey. They also made their attendance in Drew's most plays to cheer him up.

Depsite residing in Canada, drew spent his childhood days in Santa, California. After his primary level, the receivers joined Canyon High School of the S. Hart Union High School District. Shortly after high school, Drew was committed to joining the University of Minnesota in 2013. He also represented and played his college football at Minnesota from 2013 to 2016.

The Canadian international was average in his studies. He was mainly busy with football, due to which he didn't have much time concentrates on his study. He is a 2016 graduate of the University of Minnesota. He has not disclosed his graduation in a specific subject or field.

Since childhood, Drew Wolitarsky, a 2017 CFL drafted receiver, has had a keen interest in football. His parents have a massive contribution to his football career.

During his college football at the University of Minnesota from 2013 to 2016, he made an appearance in overall 47 games with the stats of 130 receptions for 1749 yards and nine touchdowns. He was also one of the favored and crucial footballers at his college. In the 2016 Holi Bowl, during his last college game, Drew had an impressive performance leading his team with five catches for 73 yards in a win over the Washington State Cougars.

Former Minnesota wide receiver Drew Wolitarsky began his football career with Golden Gophers. At the same time, he was grinding hard to get into the NFL, but sadly he remained undrafted in the 2017 NFL Draft. His brother has a key role in Drew's CFL career because after he remained undrafted, he suggested trying for the Canadian Football League so he could apply for Canadian citizenship because of his Canadian mother. 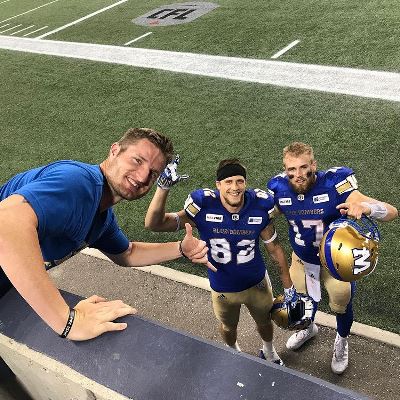 Drew with his Bombers mate in training session SOURCE: Instagram

On top of that, there is a high probability of getting into the CFL compared to the NFL. Luckily, it got approved in one day and switched to the CFL in 2017 after being drafted by the Winnipeg Blue Bombers in the supplemental round of the 2017 CFL Draft on 27 June 2017. The Winnipeg wide receiver later signed a practice roster deal on 11 July 2017.

The American-Canadian wide receiver made his first CFL appearance on 6 October 2017 in the game against Hamilton Tigers-Cats. It has been about five years since Drew has made an appearance with Winnipeg Blue Bombers in various games. His period with Bomber is going well as he expected. As of today, Drew, the Minnesota graduate, has played in a total of 40 games with 79 receptions for 1026 yards and nine touchdowns.

Annual earnings, wage, and net worth

The 27 years old CFL star player Drew William Wolitarsky is a well-known and well-settled player that has been making his presence in CFL since 2017. He has a good taste of success in his CFL career. The athlete credit most of his ball balance to his football career only. a handsome amount of money playing from his team. His decision to switch to the CFL side is one of the best decisions. When he signed a contract with the Winnipeg Blue Bombers in 2017, the California-born receiver netted a whopping wage of $3,45,000 yearly. The salary numbers have expanded coming to 2022. As per the report, Drew has a worth of about $1Million to $5Million, including his property, mansion and cars.

Apart from football, Drew also makes huge riches from his sponsorship, commercial ads and endorsement deals. Regardless, the athlete has not transparentized the capital he acquired from such deals.

Son of an American father, Drew is very open about his relationship status with the public. He is a happily married person. The receiver is the beloved husband of his gorgeous spouse Savannah Benton. The couple has a small nuclear family of three members. They are blessed with a baby boy. 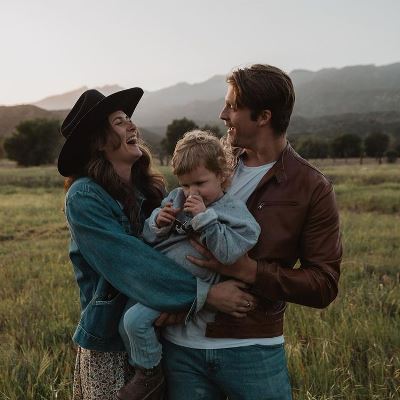 However, the date of their wedding remains a mystery at the moment. The duo loves their companionship and marital life to the fullest.

Drew Wolitarsky is a well-organized individual that uses his social media systematically. We can find him on various social media like Instagram, Twitter, etc. He has a verified Instagram account named @drew_william_wolitarsky, and his followers are more than three thousand. He keeps his fans updated regarding his daily happens, events, and sports news through his social media. He also uses it as a medium for promoting his sponsors and brands.

Explore fascinating facts, news and bio of payers at Playerswiki