Doug Pederson is an American football coach, a retired player who currently stands as the head coach of the Philadelphia Eagles of the National Football League (NFL). Previously, he served as the offensive coordinator to Kansas City Chiefs (2013-2015) and Calvary Baptist Academy (2005-2008). Between the time, he was offensive quality control coordinator (2009-2010) and Quarterback coach (2011-2012) at the Eagles.

Born on 31st January 1968, Pederson spent most of his playing career at Green Bay Packer. Besides, 1991 undrafted, he also played for Miami Dolphins, Carolina Panthers, Green Bay Packers, Philadelphia Eagles, and Cleveland Browns in the NFL. Most prominently, he is the 4th person in the NFL history to win a Super Bowl as both a player and head coach after Mike Ditka, Tom Flores, and Tony Dungy.

How Much Is Doug Pederson Net Worth?

As of 2020, Pederson has an estimated net worth of $15 million. The significant source of his income is NFL: intially as a player and now as a coach. Currently, he is signed to Philadelphia Eagles as head coach but has not disclosed the contract value and salary. As reported, the average salary of the NFL head coach is $6 million to $7 million. 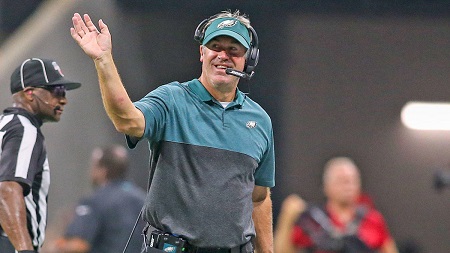 In 2016, he scored $1.95 million for an 8,000-square-foot home on 3 acres of gorgeous grounds in New Jersey. The house features five bedrooms, four baths, and two half-baths. Earlier, he owned a beautiful six-bedroom home in Overland Park, KS. He sold the house in April 2016 for $875,000, shortly after accepting the head coach gig with the Eagles.

Doug and his wife, Jeannie, has been married since 1992. The pair met on a blind date at Johnny’s Pizza in Monroe, Louisiana, with a senior at near-by Ouachita High School while he was redshirting his freshman season at Northeast Louisiana University.

They hit it off as soon as they met, and it didn’t take long for them to date. At the time, Jeannie was still finishing her nursing degree, but she managed to stayed stateside while Doug chased his dream. 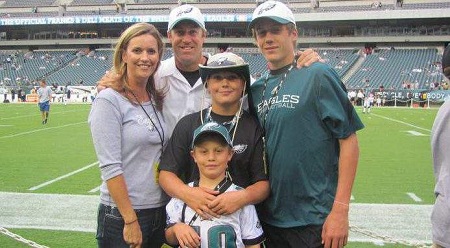 Doug Pederson with his wife and sons SOURCE: Heavy.com

The Pederson's shared three children, all sons, Drew, Josh, and Joel. In addition to their children, Doug and Jeannie were surrogate parents for many of the kids he coached at Calvary Baptist High School. Their eldest son, Drew, was a backup quarterback at Samford.

Doug Pederson was born to Teri and Gordon Pederson in Bellingham, Washington. A devout Christian, he holds an American nationality and belongs to the white ethnic background. He enrolled at Ferndale High School, where he was an All-State selection in baseball, basketball, and football.

Upon graduation, he attended Northeast Louisiana University, where he was the quarterback and still holds multiple passing records.

On 2nd August 2020, Eagles coach, Doug Pederson tested positive for COVID-19 during training camp. Despite illness, he planned to communicate with the team virtually during his quarantine. Further, he surrendered day-to-day head coaching duties to assistant head coach Duce Staley in the interval.

He is the second NFL coach to contract virus: first was New Orleans Saints head coach Sean Payton in March.