Dominic Calvert-Lewin was born Dominic Nathaniel Calvert-Lewin on March 16, 1997, in Sheffield, England. He is the son of Mr. and Mrs. Calvert-Lewin.  He holds an English nationality. His father has African and Caribbean roots, and his mother is British. Dominic played for the youth club for Shddiled United. Talking about his physical appearance, Lewin stands six feet and two inches tall and weighs 71.

Dominic started training for football from Sheffield United Youth team in 2005. He played with the team until 2014. In early 2014, The player made his debut for the senior Sheffield United team. He played in eleven games in just one season. After that, Dominic moved to Stalybridge Celtic club and Northampton Town on loan for two seasons. At the end of 2016, Calvert-Lewin moved to Everton for a fee transfer of $2 Million.

Dominic debuted as a substitute in a 2–1 win over Arsenal on December 13, 2016. Calvert-Lewin scored the winner for Everton in their Europa League third qualifying round second leg against MFK Ruzomberok. At the end of 2017, Lewin extended his contract with the team until 2023. In September 2020, He scored his first Premier League hat-trick in a 5–2 victory over West Bromwich Albion. Shortly after that, Dominic the first Everton player to score two hat-tricks in one month. Lewin played under Carlo Ancelloti along with James Rodriguez.

In 2016, Dominic made his England U20 debut. The following season, He made it to the U-20 World Cup team for England. Lewin scored two goals for the team. In 2019, Calvert-Lewin was included in England's 23-man squad for the 2019 UEFA European Under-21 Championship. In 2020, Dominic made it to the senior England team.

Who is Dominic Calvert-Lewin Dating? Know About His Girlfriend and Relationship

Dominic is an active social media user. He keeps sharing a lot of his photos and videos of his training. Following his timelines, we can be sure that Lewin is single as of 2021. In 2017, He was rumored to be dating English Model Meg Lilley. Both of them could be seen in each others timeline's, but it seems like they have parted away.

Dominic Calvert-Lewin has an estimated net worth of more than $5 Million. He is very much early in his career and shall be making millions in the future. The English player is regarded as one of the best young talents. 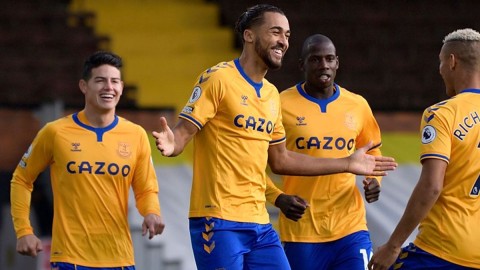