Dionne Miller came in and broke the stereotypical idea that a woman can't be as famous as a male sportscaster. In the sports reporting world, she has managed to create a perfect niche for herself. She is a prominent sportscaster and anchor of news for the ABC7 Eyewitness News Sports Team.

The resident of United States, Dionne Miller, reportedly earns around $500,000, as her yearly salary from the network, and as of 2019, she has an estimated net worth of over seven-digit figure. She is currently married to her husband Ray Crawford and has 2 children with her.

Dionne Miller Salary and Net worth

The American sportscaster/anchor Dionne Miller has an estimated net worth of over seven-digit figures. As of 2019, the reporter receives an annual salary of $530,000 from her successful reporting career with ABC7.

Further, Kristen Sze who has been working for ABC7 earns $850,000 annually.

Although she still hasn't revealed her real net worth, she lives a magnificent lifestyle. Additionally, Dionne lives with her family in the Far Northwest Side of Chicago. Further, She and her husband bought a French colonial-style house of 3,424 square feet for $705,000.

Dionne Miller's Husband Ray Crawford; How is their Married Life?

Talking about her personal life, She is currently married to her husband Ray Crawford. Her husband, Ray is an Emmy Award-winning anchor and reporter.

Dionne was fired from her job in California during the early years of her career. And the reason was simple; the new management wanted someone else. Dionne went to seek help from Shawn McClintock, the Vice President of Roots Sports Pittsburgh. 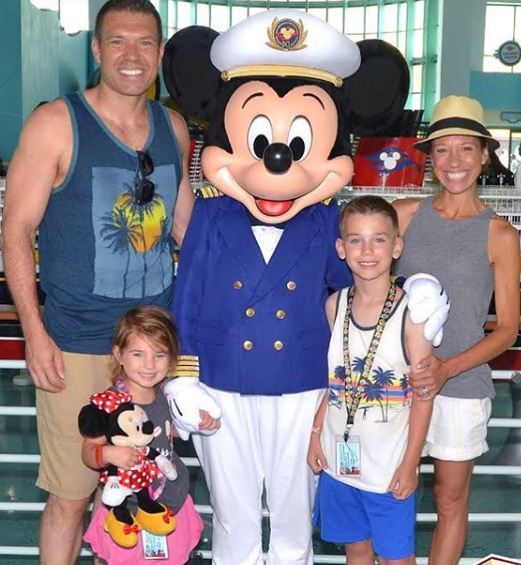 He assured her that he had a friend, Ray Crawford at a startup station looking for a woman anchor. Shawn's friend not only helped her to be hired in Columbus but also became her partner in crime.

In 2008 Dionne got engaged with Ray but the details about their wedding are not available yet. The duo is blessed with 2 children, a son named Clay and a daughter named Noa.

Dionne is one of the most attractive and smart sportscasters with presentable height and slender physics. The evergreen beauty sensation is blessed with a perfect look and charm which doesn't seem to diminish at all.

Dionne Miller was born on 18 October 1978 in Amish Country. She holds an American nationality and belongs to the White ethnic group. She spent her early childhood growing up in Amish country and later she moved to Florida with her family. The details about her family are not made public.

In addition, the information about her family and siblings are not available in the media yet. Exploring her educational background, she attended Sarasota Christian High School in Florida. She eventually joined the Christian Liberal College of Arts in the Southwestern State of New York.

She began her broadcasting career as a sports reporter at KSVI / KHMT in Billings, Montana. She soon moved to WPTZ in Burlington, Vermont as a sports anchor for the weekend. She was then the principal anchor of the Columbus Sports Network.

Dionne began working at Fox Chicago as a sports anchor and reporter, covering pre and post-game shows for the Cleveland Cavaliers, and serving as a football sideline reporter for the Big Ten Network similar to Melanie Collins.

She reached the height of her career in October 2014 when she joined ABC7 as a weekend sports anchor and reporter. Her passion for the sport has built her stellar reputation as an aggressive journalist who tells great stories and connects with spectators.