Dillon Dube is a rising Canadian Ice hockey player. He has been playing in professional events since 2017. Dube plays as a Centre/Right Wing for his team. Dillon plays for the Calgary Flames in the National Hockey League. Dube won the gold medal in the 2018 World Junior Championships.

Dillon Dube was born on July 20, 1998, in Golden, British Columbia. He is the son of Paris Dube and his wife, Suzy Dube. Much about his early life and his parent information is still under the radar. Dillon completed his primary education and started training with hockey leagues from the early days. Dube stands five feet and eleven inches tall and weighs 84 kg.

Dillon Dube has an estimated net worth of more than $2 Million. The ice hockey player has earned most of his net worth through his successful career in National Hockey Leagues. In August 2021, Dube signed his first major contract with the Flames for a three-year, $6.9 million. 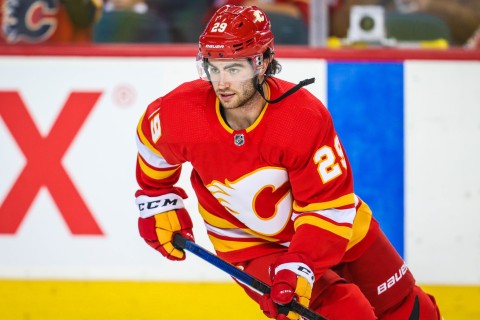 Dillon plays in the NHL for the Calgary flames as right-winger SOURCE: Flames Nation

The Canadian professional Ice Hockey is very much private about his relationship status. He has a private Instagram account and has not shared much about his love life. Dube seems to be dating his longtime girlfriend, Kristina, following information available on online sites. The love birds have been together for more than two years. Dube must be waiting for the right time to open about his relationship status.

Dillon Dube's Journey to the NHL

Dillon started playing Ice Hockey in the early days. He listed his name for the 2013 Western Hockey league, and Kelowna Rockets drafted him in the first round. After spending some time with the minor league, The player averaged 1.38 points per game in 40 games with the Kelowna Rockets during the 2016–17 season. Dube made his NHL debut in October 2018 against Vancouver.

Dillon spent his 2019 season with Stockton Heat in the American Hockey League, earned his senior team call in 2021, and signed a three-year contract.