Spencer Knight is an American ice hockey goaltender signed to the Florida Panthers of the National Hockey League (NHL). He was selected by the Panthers in the 2019 NHL Entry Draft with the 13th overall pick.

Darien, Connecticut native, Spencer Knight was born on 13th April 2001, under the star sign Aries. He holds an American nationality and is of white ethnic background. He is the son of Chris Knight and Lilly Knight. The twenty years old stands 6 ft 3 in (191 cm) tall and weighs 192 lb (87 kg; 13 st 10 lb).

How Much Is Spencer Knight's Net Worth In 2021? Salary & Contract

There is no information reported regarding Knight's girlfriend. However, there is speculation going around since he posted cozy pictures with a stunning lady in a yacht via Instagram in June 2020. The caption reads, "Rowayton Pizza on speed dial... Thanks for the visit @chloe_noelle7." 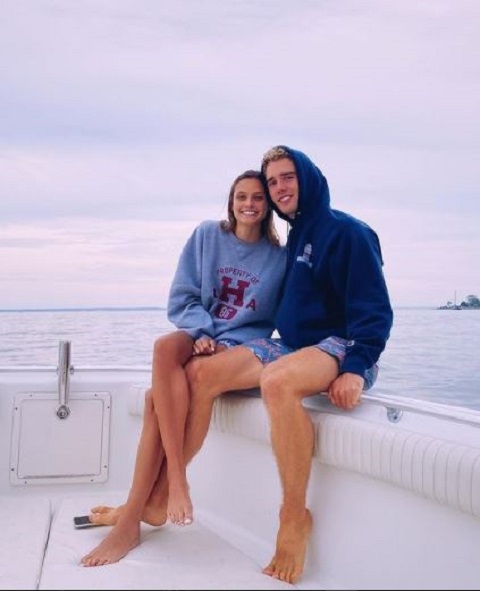 None of them has confirmed any things from their side. Also, that was the last time Chloe Noelle was seen on his IG post.

In the 2019 NHL Draft, Knight was selected 13th overall by the Florida Panthers, becoming the first goaltender chosen and breaking the franchise history that Florida chose a goaltender in the first round.

Knight then enrolled at the Boston College Eagles and played collegiate hockey in the Hockey East. As a sophomore, he excelled with a 2.18 GAA and .932 SV%, going 16–4–1 in 21 games.

After his sophomore season with Boston College, Knight left college.

On 31st March 2021, Knight signed with the Florida Panthers to a three-year, entry-level contract.

On 20th April 2021, Knight made his NHL debut in a 5–1 win over the Columbus Blue Jackets, becoming the first goaltender born in the 21st century to play in the NHL. On 2nd May, he became the youngest goaltender in NHL history to start their career 4–0 after securing a 5–4 overtime win against the Dallas Stars.

On 24th May 2021, Knight made his Stanley Cup playoffs debut in Game 5 of the Panthers' first-round series against the Tampa Bay Lightning.