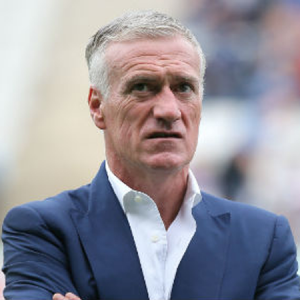 One of the renowned retired French footballer and manager, Didier Deschamps currently plays works as a manager for the France national team. Previously, he has played as a defensive midfielder for numerous clubs including Nantes, Marseille, Bordeaux, Juventus, Chelsea, and Valencia etc.

His former teammate Eric Cantona gave him a nickname  “the water-carrier”. He

Didier Deschamps was born on October 15, 1968, in Bayonne to his parents Pierre, house painter and Ginette, wool saleswoman. He grew up with his older brother who died in a plane crash while he was still a teenager. Since his schooldays, he was interested towards football.

As an intern, Didier Deschamps played rugby for a professional rugby union team, Biarritz Olympique. He then began his football career joining Bayonne in 1976 while he was in a school. Further, he left the club after playing for about eight years. He also played two years for the youth team of Nantes from 1983 to 1985.

After being promoted to a senior team, Deschamps started playing in a senior team of Nantes in 1985. Further, he left the club after scoring 4 goals in 111 appearances. He then transferred to Marseille with the transfer fee £459k in 1989.

Deschamps is the member of the team that won French Division 1(1989-92) and UEFA Champions League (1992-93). He was named as the youngest captain ever to lift the trophy in the process.

Deschamps then transferred to Juventus with the transfer fee of £4.95m after spending a loan contract with Bordeaux. Along with his team, Juventus, he has been honored with Serie A (1994-1998), Coppa Italia (1995), Supercoppa Italiana (1995,1997), UEFA Super Cup and Intercontinental Cup (1996) and UEFA Intertoto Cup (1999) etc. He has scored 4 goals in 124 matches before ending his career in Juventus.

Deschamps began his international career with the France U-21 in 1988. He played 18 matches for France U-21. After a year, he was called up to France national team.

His first appearance as a captain came in a friendly match against Germany in 1996. He was the captain of that team won 1998 World Cup in Paris, Euro 2000. Later, he officially announced his retirement from international football and his last match was against England.

Pele gave his name as one of the top 125 greatest living footballers in 2004 to March. He has scored 4 goals in 103 appearances for his national team.

Deschamps began his managerial career with Monaco. He was the manager of the team that won Coupe de la KLigue (2003). He then managed the Serie A team, Juventus and won Serie B (2006-2007).

As a manager, he has been honored with Ligue 1 Manager of the Year in 2004.

Deschamps was announced as the new manager of the French national team. As a manager, he led the team into the quarter-finals of the 2014 FIFA World Cup as well as Final of UEFA Euro 2016. Since 2012, he managed the France National Team and is the manager of the upcoming World Cup 2018. His current national team players are Steve Mandanda, Blaise Matuidi, Thomas Lemar etc.

Deschamps' birth sign is Libra. He got married to his long-term girlfriend, Claude Deschamp. The couple welcomed their first child Dylan on May 16, 1996. Since their marriage, the husband and wife live a blissful life together without any news or rumors of divorce.

His wife is two years older than him. The couple first met when Deschamps was a teenager at 18 years old. The duo owns a beautiful Spanish villa. Till this date, he has not faced any controversy about his married life or an extra-marital affair.

Didier Deschamps earns $2,161,000 as a yearly salary as a manager. His annual salary is 52 times more than the average person in France. He is named as one of the top 15 highest paid coaches in the world. Currently, he lives in a house in Bayonne, France with his family.

As of 2017, Deschamps's net worth is estimated to be $10 million. He has a UEFA Pro Licence. He was the guest of Volkswagen to honor the new sponsorship deal between the national team and the German brand. During an interview, he officially revealed that he is a lover of big cars.

Deschamps has a car collection including Peugeot 205 Gti, a Mercedes 500SL, BMW Z1 Coupe and 850 or 456 as well as Ferrari 550 Maranello collectively worth more than a million.